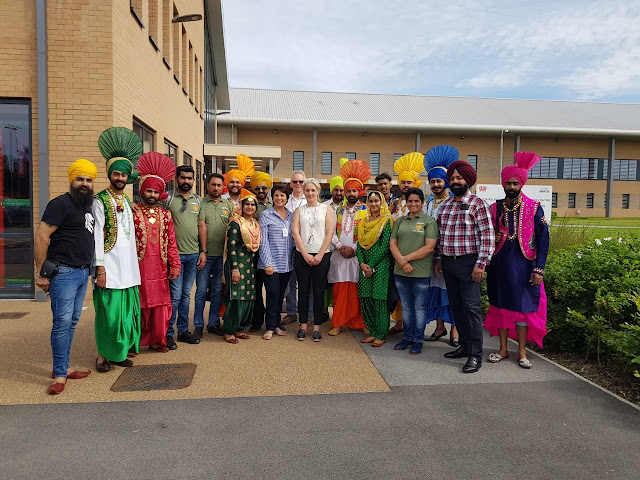 As part of the Llangollen Musical Eisteddfod, international performers were invited to entertain audiences at a number of outreach events including the HM Prison Berwyn.

The prison event, details of which have just been revealed, was a culmination of workshops and competitions organised by the collaborative efforts between the eisteddfod, Coleg Berwyn, Berywn residents, Reducing Re-offending and Welsh Lead for Equalities.

Throughout the months of May and June residents were encouraged to engage their imagination with creative writing and performance.

The final took place on July 4 when each performance category was judged by a panel of judges including the HR Manager at Berwyn Jason Kelsall, Rachel James, Head of Business Assurance at Berwyn, and eisteddfod representative John Gambles.

The event concluded in a colourful display by special guests Real Folk International Academy from the Panjab performing in the prison.

They received a standing ovation from the audience as they performed a vibrant and traditional dance.

The Real Folk International Academy then shared a multicultural buffet with the residents.

Other outreach events took place throughout North Wales during the week of the festival.

These included special appearances by international performers from Columbia and Malaysia at the Pendine Park and Abby Dingle care homes.

John Gambles, who is the eisteddfod's Town and Outreach Coordinator: “The mini eisteddfod has been a huge success at Berwyn Prison and I am honoured to have been on the judging panel.

“The key message of Llangollen Musical Eisteddfod is to promote peace and harmony within communities. These outreach schemes offer people who do not have the opportunity to attend the festival a chance to enjoy performances from international guests.”
Posted by llanblogger at 6:44 AM