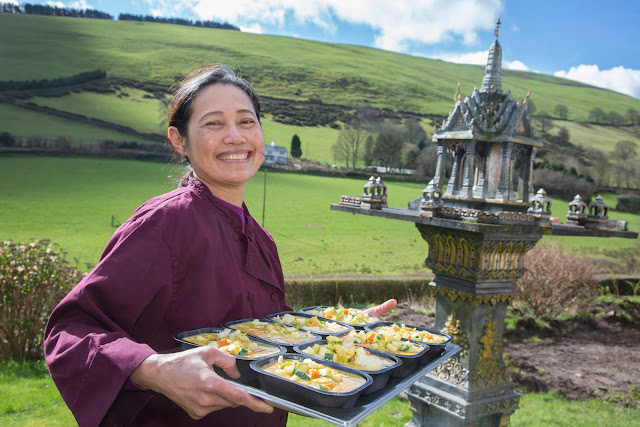 * Dtoi Harvey will bring her Authentic Thai Cuisine to Llangollen Food Festival.
A Thai food producer which has tripled in size in 11 years is to launch a brand new chicken satay starter to satisfy a growing appetite for its honest cooking.

Authentic Thai Cuisine, based in Llanferres, in Flintshire, will be unveiling the new appetiser at the Llangollen Food Festival which provides a showcase for the company.

The starter has been developed to add to its array of frozen curries, noodle dishes and sauces as part of a plan to encourage customers to make a banquet out of its products.

The business, which was launched by Dtoi Harvey 11 years ago while she was employed as a full-time nursery nurse in Wrexham, currently produces more than 300 curries, 80 noodle dishes and up to 50 side dishes every week which it supplies to farm shops and food outlets across North Wales – three times the amount produced in its first two years.

Its reputation has grown significantly since first exhibiting at the food festival three years ago and the firm now employs seven part-time staff while boasting a growing list of suppliers – the most recent of which is based in Chester.

Owner Dtoi, 57, said a recent grant from Denbighshire County Council had enabled the business to purchase a walk-in freezer and increase its production capacity as well as the shelf life of its dishes. It has also led to the launch of new appetiser dishes including chicken satay.

The mother-of-one is excited about launching the dish at Llangollen Food Festival which she credits as winning her business far and wide.

“The festival has been really important to my business. You have to be known to be a success. Some of my suppliers are based in the middle of a field. They would never have known about my food had it not been for the festival introducing them to me,” said the former language support worker, who has a son, Tom, aged 21.

“It’s so important to get out there and meet people as well as present my cooking. I’m really looking forward to bringing my chicken satay there and presenting it to a wider audience.

“People can now make a banquet out of our products which is really exciting. The idea is that people who are really busy can enjoy themselves and contribute to their dinner party rather than being stuck in the kitchen.

“There seems to be a growing demand for good quality Thai cuisine which can be heated at home. I have people who order meals to take to Scotland or London on holiday or on business which is a great compliment.”

Llangollen Food Festival, which will be held at the iconic Royal International Pavilion Llangollen on October  13 and 14, was founded in 1997 and has gone from strength to strength, annually attracting thousands of food lovers from far and wide.
As a result, it’s been named as one of the Top 10 food festivals in the UK by the Independent and Daily Telegraph newspapers, pumping almost £400,000 into the local economy every year.
Dtoi, who was born near Bangkok in southern Thailand before moving to the UK 30 years ago, worked as a nursery nurse/language support worker for 15 years, helping foreign children in the area adjust to school life and alleviate language barriers.

It was while helping GCSE home economics pupils in the school kitchens she rediscovered her love of cooking authentic Thai food and the idea for her own food label was born.

To begin with Dtoi, who lives with her husband Graham, an engineer, donated her culinary creations to friends, family and community events to gauge feedback before formally going into business.

Now, 11 years later, she’s swapped the humble setting of her home kitchen for a self-contained unit in the garden and is responsible for seven part-time employees.

What hasn’t changed is the honesty of her cooking which remains preservative and additive-free (some dishes are also gluten, wheat and dairy-free) and emphasises the therapeutic, medicinal properties of the traditional herbs and spices to reflect her Thai culture.

“I’m really excited about launching this new starter at Llangollen Food Festival. I’m really the only person in the business who can talk in-depth about my products and the detailed cooking process so it’s important I’m there.

“All of my ingredients are helpful emotionally and physically. Turmeric, for example, is a natural antiseptic and helpful for balancing hormones in women and men. Lemon grass as well as shallot and garlic soup is great for settling tummy aches. I understand the properties of the ingredients I use which is why I love coming to festivals and talking about it to my customers.”

She also uses local producers where possible including J Williams & Co Butchers in Denbigh and fresh vegetables from Mold.

Phil Davies, a member of the committee at Llangollen Food Festival, said: "Companies like Authentic Thai Cuisine are what we are all about.

"We're particularly proud that we have been able to provide a shop window for Dtoi’s fantastic culinary talents and that we have helped her company develop and grow.”

* To find out more about Llangollen Food Festival go to: www.llangollenfoodfestival.com
Posted by llanblogger at 6:58 AM