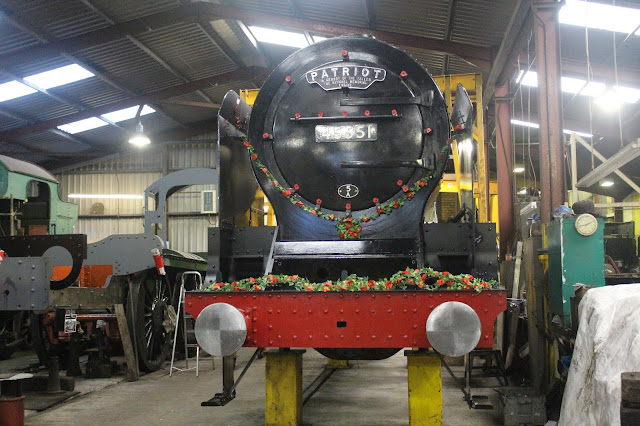 * The National Memorial Locomotive while under construction at Llangollen.

Llangollen Railway  has announced "with some sadness" their decision not to undertake further work on the project to build the new National Memorial Locomotive.

Consequently  the heritage railway will not be doing any further work beyond what is currently underway on the project to build a steam locomotive to remember those who died in the First World War.

Members of the engineering team at Llangollen have been working on the construction of The Unknown Warrior for the LMS Patriot Co. Ltd, since 2008.

Following intensive discussions with the team behind No 45551, a railway spokesperson announced: "We have taken the decision not to tender for any further work in regards to the LMS Patriot Company,  Llangollen Railway has a full order book and is therefore unable to meet with the very tight time scale requirements of the project.

"On October 29 the Patriot locomotive, No. 45551, will be leaving Llangollen for the last time and will travel to Crewe Heritage Centre to have its boiler trial fitted.
"Llangollen Railway wishes the LMS Patriot Company well in the completion of The Unknown Warrior."
Posted by llanblogger at 6:46 AM