Public get their first view of town's traffic blueprint 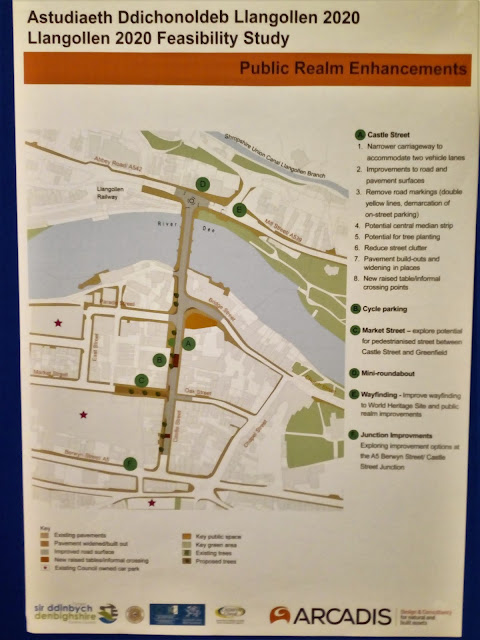 Llangollen people have been given their first look at a £2 million blueprint for the future shape of the town centre.


Consultants firm Arcadis, which has been hired to find solutions for the area’s traffic problems, hosted two briefing sessions – one outside the Town Hall yesterday (Wednesday) afternoon and the other inside the building in the evening – where it unveiled its vision for how things could look by 2020.
While this is still subject to consultation and amendment before the final version is presented at the end of next month, proposals include a new mini traffic island at the Abbey Road end of the famous bridge, the partial pedestrianisation of Market Street and the removal of parking bays along Castle Street.


While a steady stream of interested people turned up at the four-hour daytime briefing session less than 30 members of the public, including residents and business owners, attended the hour-long evening event.
Alison Powell of Arcadis (pictured below) explained that the feasibility and scoping study being presented was a collection of ideas and suggestions which at this stage had no official status. 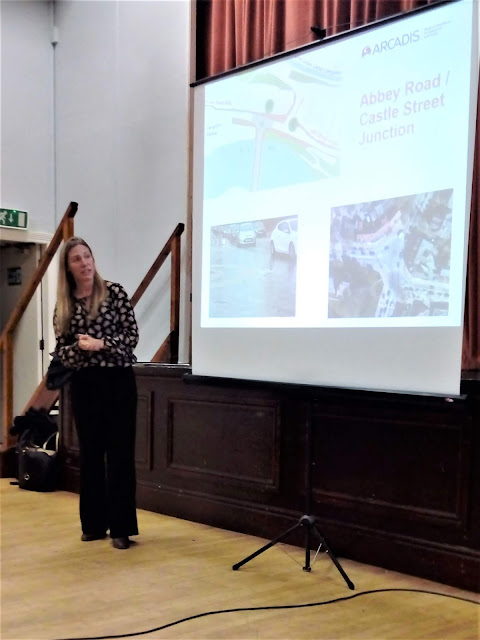 “We have been trying to work out what is technical and feasible in terms of solutions,” she said.
“Our aim is to create a high quality town centre environment which is attractive, safe and provides usable public space for a range of users and activities.”


Problems identified by her team around Castle Street, she said, was a conflict between pedestrians and traffic flow at the Abbey Road and A5 junctions, both of which were at or near capacity, the obstacles of parked cars, narrow pavements and general east/west traffic flows. In a bid to find solutions Arcadis looked at various forms of traffic modelling and examples of best practice in other areas of Britain.
An on-street public consultation exercise by the team in July, she revealed, had seen 300 responses submitted and Arcadis had also sounded out businesses, the Chamber of Trade and stakeholders including the Pavilion and the railway.

Chief complaints about Castle Street this had thrown up were the volume of traffic (74%), parking at the roadside (72%) and the lack of pedestrian crossings (56%).


Proposals for improvement include:
* Directional signs on the main roads into town aimed at diverting HGVs away from Llangollen.


* Pavements on the western side of Castle Street being widened.
* The creation of two pedestrian crossing points, on slightly raised sections of roadway, on the main street – one outside the library.


* The removal of street “clutter”, such as repeated signage, on the street.
* A slight reduction in the width of the carriageway on Castle Street.


* More tree planting along the street.
Major proposals include the creation of a mini roundabout at the Abbey Road end of the bridge and the stopping up of Market Street from Castle Street back to Greenfield.


This partial pedestrianisation would mean that buses coming into town will have to instead reach Parade Street via the A5 and the top end of Market Street.
Alison Powell said there would still be access to properties along Market Street but the stopping up might allow for the market to move off  the nearby car park and into the street, freeing up valuable parking spaces.


Parking spaces would also be removed from the section of Abbey Road immediately opposite the bridge to allow for the roundabout to be put in.
On the sensitive issue of parking, she said proposals were to reduce the number of long-stay spaces on the Market Street car park presently used by residents using permits therefore producing more short-stay spaces, the removal of parking spaces on Castle Street and having visiting coaches dropping off and picking up on Market Street car park while actually parking up at the Pavilion.


A limited number of disabled parking bays would be created in Bridge Street and Oak Street.
Next steps in the 2020 process before the final draft is published at the end of November, she explained, were a review of latest feedback, further research on what could be done to ease traffic problems at the Castle Street/A5 junction – a couple of options for this were in mind, she said – and estimations of the costs and economic impact of the proposals.


A question and answer session brought out a number of points, mainly on parking. These included:
* Concern by a B&B owner about her guests being able to find long-stay parking. Alison Powell said the aim was to accommodate all needs.


* Whether coaches would be put off  by not being able to park on Market Street. To this she answered that research by Arcadis had shown that was unlikely.
* Whether cars would stop to allow people to use the new crossing points.  AlisonPowell said: “In other places that have these cars do stop.”


* Why a narrower carriageway on Castle Street was necessary on top of removing parking on the street. “We need to do something additional to slow down the traffic,” she replied.
Graham Timms, one of the county councillors for Llangollen and chair of the 2020 working group, said: “The needs of businesses, residents and visitors have to be balanced to make the town centre work better for everyone.”


He said the overall cost of the 2020 scheme would be around £2 million. If eventually approved, half a million pounds of this would come from Denbighshire, between £160,000 and £200,000 from the Welsh Government with a “range of other options” being explored for the remainder.
Cllr Timms revealed a number of other moves were being considered to alleviate the parking situation.


These included freeing up more spaces for short-term use by asking the owners of parking areas such as St Collen’s and inside the Pavilion grounds if they will allow these to be used by people working in the town centre so visitors can use the spaces they would normally occupy.
Later Cllr Timms said: “Arcadis is putting forward new and innovative solutions to some longstanding traffic problems in Llangollen.


“The Abbey Road/Castle Street junction usually operates at capacity and on busy days it simply can’t take the volume of traffic, causing tailbacks in all directions.
“This also applies to the junction at the other end of Castle Street controlled by traffic lights onto the A5, where improvements to the light sequence and improved pedestrian crossing points will also lead to the traffic flowing more freely.


“The report also suggests the creation of a pedestrian zone on Market Street banning traffic from entering or leaving the main Castle Street. The consultants say that removing traffic from this area will help with traffic flow by removing the obstructions caused by large vehicles turning at this junction.
Llangollen’s other county councillor, Melvyn Mile, said: “Denbighshire County Council has already agreed to make an initial contribution of £½million towards the project and further funding is being actively pursued by the Llangollen 2020 group.


“Llangollen has the second highest footfall in Denbighshire during August, closely following Rhyl, whilst beating Prestatyn, Denbigh and other tourist hotspots within the county. But traffic chaos and parking misery have been an increasing problem in a town which we believe is the jewel in the crown of Denbighshire’s heartlands.”
* The Arcadis study was instigated by the Llangollen 2020 group that was formed in October 2017. The initial team comprised of Llangollen’s two county councillors, two town councillors and representatives from the Chamber of Trade.


The study has been jointly funded by a range of partners including Cadwyn Clwyd, Welsh Government, European Union, Denbighshire County Council, Llangollen Town Council and the Area of Outstanding Natural Beauty.
Posted by llanblogger at 9:38 AM