Humorist and performance poet Les Barker (pictured) will appear as guest of Llandegla All Styles Music Club at the Memorial Hall, Llandegla at 8pm on Monday October 15. 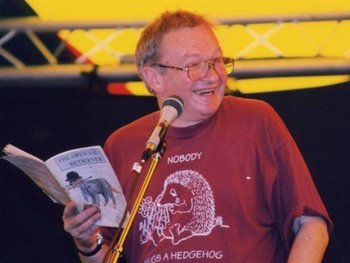 The evening's programme also includes singers and musicians. There is a raffle and admission is £5.

Hailing from Manchester but now living in Bwlchgwyn as well as touring Britain, Les has also performed in Hong Kong, Australia, New Zealand, the USA and Canada.

He has published 75 books to date and has released 20 albums.

A club spokesman said: "Les has a worldwide reputation for leaving his audiences helpless with laughter, from here to the other side of the world

"With doors at 7.30 and a prompt start, at 8pm, we hope to fit in some singers as well, so bring your instruments.

"We're very sorry to report that the guests we had booked for our next event, Fiddlestone, are unable to perform, owing to the hospitalisation of one of their members.

"We wish him well and hope to host Fiddlestone in the New Year."
Posted by llanblogger at 11:34 AM