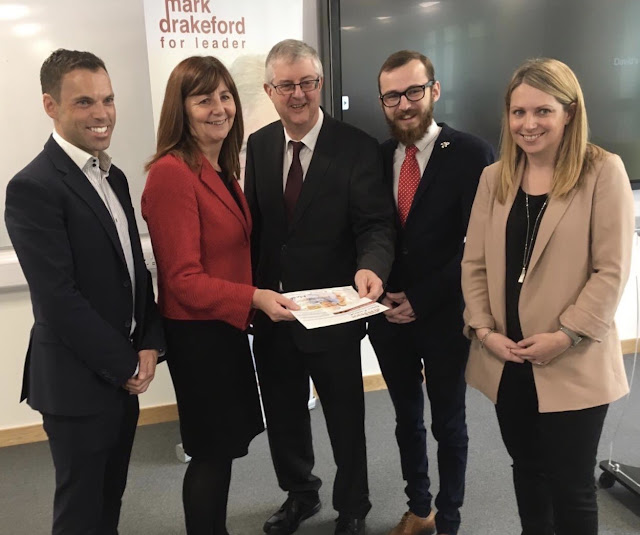 Ahead of a hustings in Rhyl tomorrow (Thursday) Economy Secretary Ken Skates, AM for Clwyd South, said a prime reason for backing Mr Drakeford is his commitment to North Wales.


Mr Skates said: “It’s clear that Mark is the choice of – and the best candidate for – the North.
"A key consideration of mine was the future development of, and investment in, North Wales. Mark understands the need to address concerns over the divide between North and South and to ensure we have a strong voice and the ability to flex our own economic muscles.”
Launching his North Wales campaign at Coleg Cambria in Northop on Saturday, Mr Drakeford announced that – as First Minister – he would appoint a Minister for North Wales to address the ‘disconnect’ with the South.


He said: “I recognise there has always been some sense of disconnect between the North and the South. As First Minister I would appoint a Cabinet Secretary from North Wales as a Minister for North Wales and they will have the full machinery of government behind them. I will ask that person to explore what more can be done to strengthen the bonds between the North and South, by considering an idea developed by Ian Lucas, MP for Wrexham.”


Mr Drakeford said the North Wales Minister will chair a standing committee of the Cabinet, to meet regularly in North Wales.


Outlining his vision for the economy, Mr Drakeford said: “What I am describing is a reapplied radical form of 21st Century socialism where we use the power of acting together to make the biggest difference in the lives of the greatest number, to lead and not to follow the fourth industrial revolution and to create an economy here in Wales which by sharing the fruits more fairly provides prosperity for the many, not just the few.”