Residents are being asked to be considerate if they are planning on having a Bonfire Night display at home.

Denbighshire County Council is urging the public to consider neighbours who may be frightened or distressed by the noise and commotion. 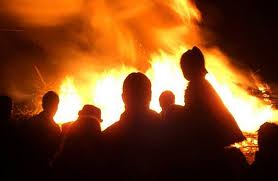 Cllr Tony Thomas, lead member with responsibility for Public Protection, said:  “There are a number of organised displays, in Denbighshire and across the region, scheduled for Bonfire Night and we would recommend people attend those rather than have their own fireworks party in their back garden, for both safety and social reasons.

“If people want to hold their own event, we would ask they inform their neighbours well ahead of time so neighbours are aware when the fireworks are going to be let off. This allows them to make arrangements in relation to any pets they may keep, or to make plans to go out if they don't want to listen to the noise.

“We would also ask that people, no matter how experienced, take all the usual safety precautions, accidents happen when you become lax about the danger that you may be in.”

Anyone that chooses to use fireworks in an anti-social and irresponsible manner could find themselves on the wrong side of the law.

Under fireworks regulations there is generally a curfew preventing people from letting off fireworks between 11pm and 7am but this is extended to midnight on November 5th and 1am on New Years’ Eve, Chinese New Year and Diwali.

Similarly, parents and youngsters are reminded it is illegal for children under 18 to buy or be in the possession of fireworks.

Fireworks are explosives and should be treated with great care and respect, here is our advice for anyone considering using fireworks this November:

1.         Only buy fireworks from reputable outlets and be wary of fireworks sold via social media