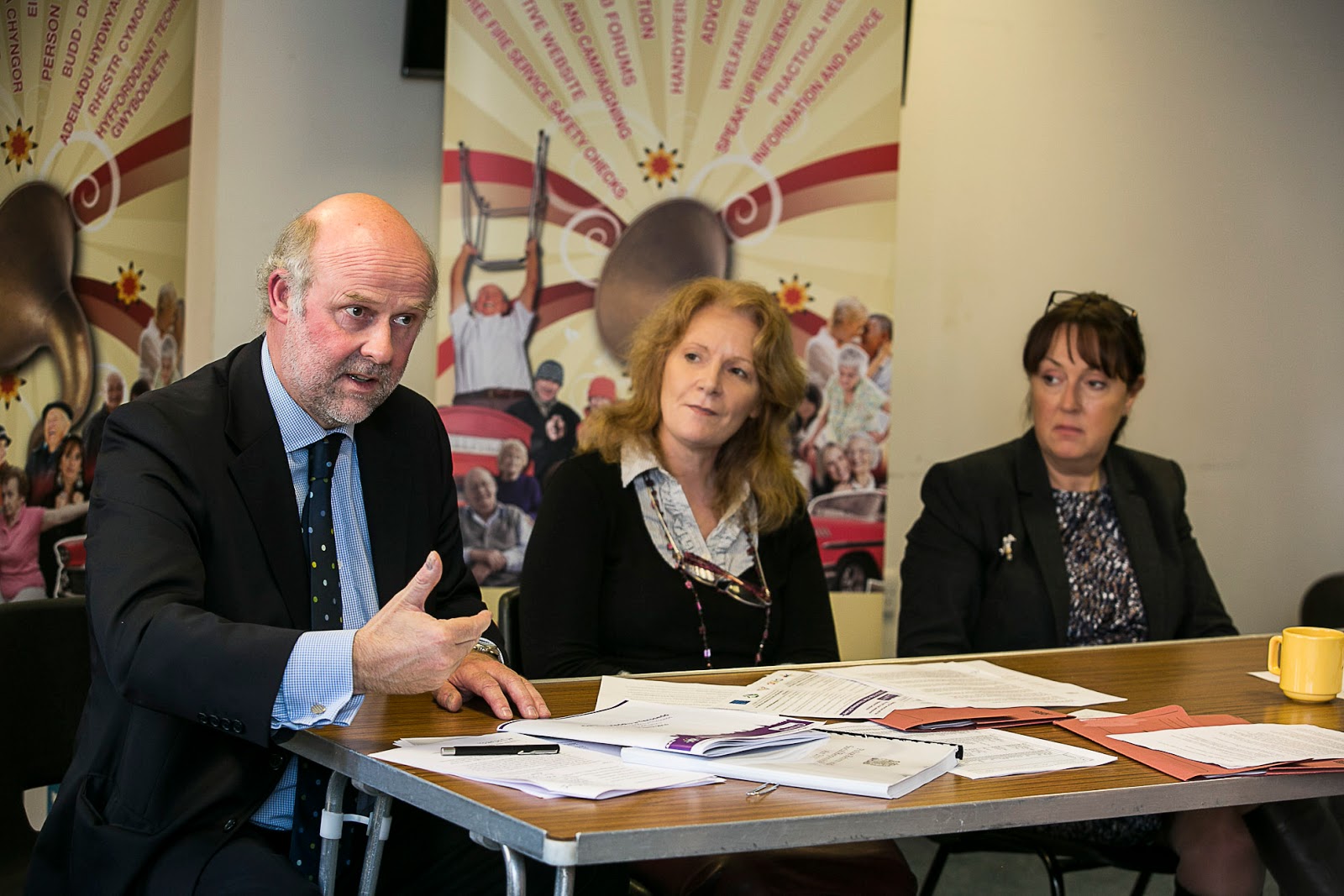 * Deputy Police Commissioner Julian Sandham with
Older People's Commissioner for Wales Sarah Rochira
and Age Connects CEO Judith Wynne.
A police boss has pledged to put the views of older people at the heart of policing in North Wales - to help them feel safe out and about and in their own homes.
According to Julian Sandham, the Deputy Police and Crime Commissioner, North Wales is one of safest places in the UK - but older people don't always feel that way.
Mr Sandham told a special’ Hubbub’ Forum organised by Age Connects, it was important to combat the fear of crime.
He was also keen to hear their opinions which would help in putting together an updated version of the Police and Crime Plan, the blueprint for policing North Wales.
The Deputy Commissioner was joined on the panel in Rhos on Sea by Sarah Rochira, the Older People's Commissioner for Wales, who recently published a major report on care homes.
Mr Sandham said: "Meetings like this are critically important to hear the voice of the people and to assess the points that they make.
"We want to consult with all sections of the community including groups which can be hard to reach.
"We want people to feel secure in their homes.  We want people to feel safe in public places.
"Perception is really important. North Wales is one of the safest places in the UK but older people don’t necessarily feel that so there’s a job to be done in terms of reassurance."
Sarah Rochira is working with Welsh Police and Crime Commissioners on the Ageing Well in Wales programme.
According to Ms Rochira, ensuring that people feel safe was crucial to the quality of life the programme was aiming to promote.
She said: "Older people want those of us who are in public service to ensure that they’re listened to but more than that responded to and that’s something that unites us all as Commissioners.
"Policing is important to everybody and that includes older people. Many older people often say to me ‘we don’t feel safe so we don’t go out at night’.
"Older people tell me and are very clear with me in respect of this - that feeling safe is just as important as actually being safe. We shouldn’t underestimate perception and how people feel."
Judith Wynne, Chief Executive Officer of Age Connects in North Wales Central which covers Conwy and Denbighshire, was grateful to Mr Sandham and Ms Rochira.
She explained: "Our primary purpose as an organisation is to make sure that the voices of all older people are not only listened to but also acted upon.
"It was clear to see that both Commissioners really engaged with Hubbub members and they gave assurances that their views would be fed back to appropriate agencies and departments so members' concerns would be listened to and where possible acted upon.”
Posted by llanblogger at 7:08 AM