Do you recall last train through Llangollen?

Local people are being asked to help Llangollen Railway remember the 50th anniversary of the day Dr Beeching’s axe fell on the line.


The passenger rail route through Llangollen to Barmouth was one of a number which fell victim to the infamous purge of lines in the mid-1960s.
It only came to life again as a heritage railway thanks to a team of dedicated volunteers who took it over in the 1970s eventually developed it into the top tourist attraction it is today.
Now, as the half-century anniversary of the original line closure rapidly approaches, the railway is asking if local people have anything which helps recall the occasion.
Spokesman George Jones said: “In the new year, January 18 to be precise, we will mark the 50th anniversary of closure of the line between Ruabon and Barmouth  Junction in 1965.
“The 18th was a Monday in 1965, so the last passenger train ran from Llangollen to Ruabon prior to the official closure day, on Saturday 16th, as part of the Beeching Axe.
“The line between Llangollen and Bala (via Corwen) had no service from December 14 due to flooding at Llandderfel.
“As there is no train service planned in January 2015 beyond the 4th, Llangollen Railway will not recreate the event as such on the anniversary date.
“However it could be interesting if some facts can be gathered together. I am unaware of any photo of the last train leaving Llangollen but wonder if the Llangollen museum has one - it was an era of many line closure was so not unusual or unique. 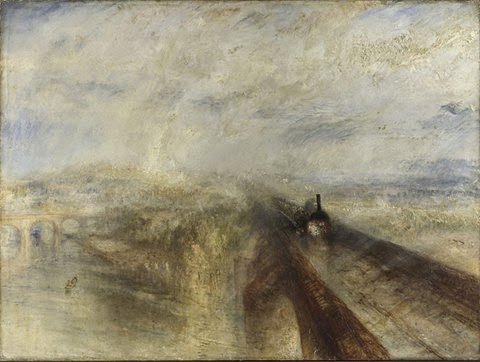 “Perhaps some older folk in Llangollen have memories of the last train.”


If you have any pictures or memories of this landmark time, please get in touch with llanblogger and we’ll pass everything on to George Jones at the railway.

* Looking back at its high lights of the year 2014, Llangollen Railway recalls that it was used as a location in the filming of the new movie Mr Turner featuring the life of British artist JMW Turner, starring Timothy Spall.

Part of the film was shot near Carrog Station, with the production company hiring vintage steam locomotive 'The Planet' from The Museum of Science and Industry as it looked most like the engine used in the famous Turner painting 'Rain, Steam, and Speed - The Great Western Railway' (pictured above).
Posted by llanblogger at 7:12 AM