County says it's ready for an icy winter 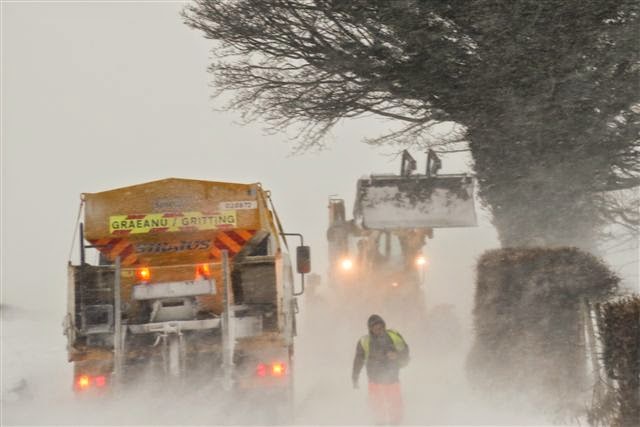 * True Grit: The county council says it's ready for the winter.

With forecasters are predicting an icy winter ahead, Denbighshire County Council says it is fully prepared to deal with freezing conditions.

The authority has given a rundown of how it prioritises its gritting schedule, mainly through carrying out precautionary salting on certain roads so that peak traffic times are avoided.

The salt has to be crushed by traffic to make it effective.

There are some occasions where the council cannot salt before the onset of icy conditions, such as:

■ When rain is followed by rapidly clearing skies, salting is normally deferred until the rain stops to prevent it being washed off.
■ Dawn frost on dry roads. When early morning dew falls on a cold road and freezes on impact. It is impossible to forecast with any accuracy when this will occur.
■ Rush hour snowfall. When rain turns to snow coinciding with rush hour traffic, early salting cannot take place as it would wash off, and gritters cannot make progress because of traffic congestion.

You can get gritting salt from the yellow grit bins located around the county. You can spread grit on pavements and other public footways, but not on driveways. Use a spade or shovel to spread the grit thinly and evenly across the pavement.
All of the council's salt has now been delivered and it is in the process of sheeting it to protect it.

A spokesperson said: "We are storing about 1000 tonnes less this year (down from the 10,000 last year) down to the fact that we don't want to be holding salt for too long so we'll use the older stock first. We can call up any additional supplies at very short notice."

Posted by llanblogger at 7:04 AM