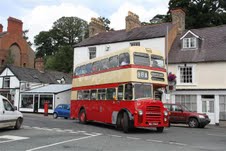 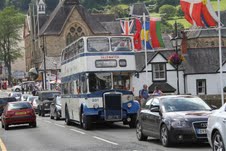 Nostalgia buffs were out in force for Llangollen Railway’s 1960s weekend last Saturday and Sunday.
And one of the stars of the show was 18-year-old A-level student Sophie Francis who can usually be found hard at work in the railway’s own Victoria's Tea Rooms on the station.


Sophie swapped her waitress's apron for a Mary Quant mini-dress when she sang live as the event.
Sophie, who has lived in Llangollen all her life is no stranger to live performances, reached the final of the OpenMic UK talent contest earlier this year.
She said: "I enjoy singing - it's an escape from the tribulations of the real world and something
that's mine.”

Sophie was joined by singer and railway volunteer Matt Grindley for trackside performances on Saturday and Sunday afternoon .

Those living near the railway in the Dee Valley were invited to join in the fun, with a £10 ticket available including return train travel from Carrog or Glyndyfrdwy to Llangollen, with a train back after the concert.

On Saturday the 60s weekend provided a high level view of the road to Carrog when a period St Helens Leyland No.54 bus ran between stations.

The free ride proved popular with visitors as a contrast to the train journey.

Event co-organiser Tez Pickthall said: "This is the third 60's weekend that we have organised andit was the best yet.

“The railway ran a busy timetable of steam, diesel and railcar trains - just like would have been seen on Britain's railways in the 60's.

“It was a time of great change with steam locomotives disappearing altogether in 1968, along with many miles of branch line at the hands of Dr Beeching's modernisation plan - including the line that is now the Llangollen Railway.

“As well as the great live music we had a range of trade and society stands and a real ale barat Llangollen.

“At Glyndyfrdwy station there were over 100 vintage vehicles on display; from the humble Ford Anglia to the sleek Volvo P1800S made famous by Roger Moore in The Saint.

There is a bus rally due on Bank Holiday Weekend, Saturday/Sunday, 25/26 August billed as a Classic Transport weekend.

It involves intensive train service and a free classic bus operating between Glyndyfrdwy and Corwen to promote interest in the railway's extension from Carrog.

There will be exhibits on the field behind Glyndyfrdwy station, with final details yet to be released.
The autumn steam gala is lined up for 31 August/1/2 September.
In addition there is another Murder Mystery on the evening train Saturday 18 August.
Posted by llanblogger at 6:10 PM