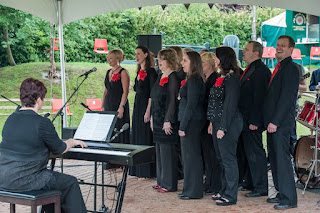 * The Travelling Troupe on song at Llanfest 2012 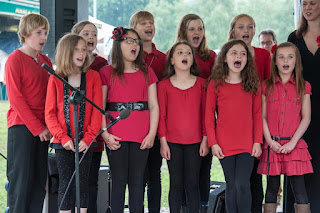 * The Young Uns at Llanfest

Music on the Move


It was the first time the group had been invited to perform there, although the Society has participated in Eisteddfod Sunday in previous years, so they were keen to put on a good show and publicise our activities.


Despite the inclement weather, the group accompanied by their fantastic band, delivered two very worthy performances on the outdoor stages to appreciative (if not slightly muddy!) audiences.


The 20-minute programme featured songs from James Bond movies, a Rogers and Hammerstein Medley and an arrangement of the Jubilee anthem “Sing”, the original of which featured the Military Wives choir led by Gareth Malone, who was a special guest at that evening’s concert.


For the rendition of “Sing”, the troupe called upon several enthusiastic members of the Young Uns who helped ensure it was a resounding success.


It also made the event a real family affair for a number of troupe members who found themselves taking to the stage with their offspring.


Simon Orton-Jones, who performed alongside his wife Tessa and daughters Millie and Celyn,  said: “We really enjoyed the performance and it was particularly nice to have all the family involved and to perform at a local event.


“It was quite fun rehearsing this at home but I’m not sure what the neighbours felt about it!”


Disappointingly, Gareth Malone was not able to watch the performance but he did chat about it with a few very excited members backstage during the evening concert and even posed for a photograph!

Keep your eyes peeled for further information about the Travelling Troupe’s next showcaseevent “Lost in Music” on Friday 14th and Saturday 15th September in the Town Hall.


This cabaret- style evening, with an enthralling programme ranging from rock to opera and well known West End numbers is guaranteed to help you lose yourself for an hour or two.

Do you or your children like singing and acting or would you be interested in getting involvedin the production of our shows?


If so, why not come along to one of the troupe’s rehearsals in September for an informal chat and to see what we do.


No previous experience is required and much fun guaranteed.