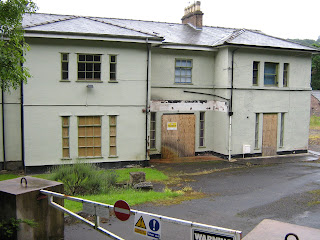 * River Lodge could also be a
referendum question.


The chair of Llangollen Preservation has now confirmed he is calling for a vote by the people of Llan on the issue of whether the local Cottage Hospital should be allowed to close, as announced recently by the Betsi Cadwaladr University Health Board.


But Martin Crumpton has made it clear he is demanding the referendum in his own name rather than his capacity as chair of the group.


He also says other questions might be on the ballot paper, such as whether Llan should quit Denbighshire in favour of Wrexham and if people  support the community development of River Lodge in the town, which could be earmarked as the site for a new health centre.


The health board says in a report Llan Hospital could close to be replaced with a new community health facility on the site of the River Lodge, which is owned by the Welsh Government and was recently the subject of a hearing by Assembly Members into its acquisition by the former Welsh Development Agency.


“I am currently consulting with interested residents over other questions to include, but these may include:


“When the final template letter has been agreed, at least six residents who are registered electors will issue their requests to both the Town Clerk and Denbighshire’s County Clerk by, or before the end of the first week of August.

“Our standpoint is that if we wait for the Town Council to meet and consider its response, which will be no more than a weak statement, we will have lost nearly a month’s organising and preparation time from which we can take action rather than issue bland statements.


“Regrettably, we have no confidence that the public consultation – which will begin before the next Town Council meeting in any case – because there is no assurance that our views will be acted upon.
In a statement on Facebook yesterday (Wednesday) Mr Crumpton said there would be inadequate time for the Town Council to consider the hospital closure question as the health board is due to begin its public consultation process on August 20.


But Town Clerk  said in a letter to Llangollen Preservation that, with the council meeting in both August and September, there would be “adequate opportunity” to consider the proposals.
Posted by llanblogger at 4:19 PM