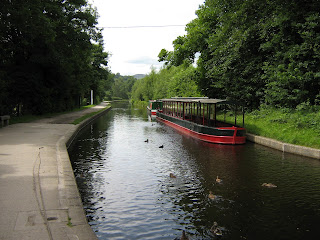 Llangollen Canal has a new owner.


Earlier this week, British Waterways and the Waterways Trust formally handed over responsibility for more than 2,000 miles of historic canals and rivers across England and Wales to the Canal & River Trust in what is described as a move to get communities more involved in their local waterways.


The new charity, whose Patron is the Prince of Wales, will give the 10 million people who visit and lovethe waterways a greater role in making them cleaner and more beautiful than ever.


To mark its launch, the Trust has unveiled its first appeal, 50 projects across the nation that will breathe new life into towpaths and riverbanks.


By pledging money or time people can get involved in projects such as creating new habitat for rare water voles, planting linear orchards for people and wildlife, and restoring neglected towpaths.


To see a list of the appeal projects, learn how to become a Friend of the Canal & River Trust and find out how you can get involved visit www.canalrivertrust.org.uk/appeals.


“The Canal & River Trust needs your help to make your towpaths even more special.


“Volunteering or making a small donation will make a huge difference to the people and nature along your local waterway.”


The move, part of the Public Bodies Reform programme, is the largest single transfer of a public body into the charitable sector.


The Trust says it aims to build upon the public passion for the nation’s canals which rescued them from dereliction and decline in the last century, through increased fundraising, volunteering and community involvement.


Defra is helping the new charity get off to a great start by committing to a landmark, 15-year grant funding agreement as the bedrock to help the Trust maintain its waterways.


The Trust is also funded through commercial income including money from its waterside property dowry, boat licences and moorings.


The Trust says every penny donated by the public will be spent directly on conserving, restoring, and enhancing the waterways.


Tony Hales, chairman of the Canal & River Trust, said: “In the last 50 years our canals and rivers
have been transformed from a national disgrace into a national treasure.


“This in itself has been extraordinary, but it is only the start. The Canal & River Trust opens an exciting new chapter in the waterways’ long history and gives a chance for everyone who cares for them to play a part in their future.


“By harnessing public goodwill and energy our canals and rivers can breathe much needed new
life into our towns, cities and countryside. It’s an amazing opportunity and we can’t wait to get going!”


£1million of funding is being pledged to support the Trust’s conservation work thanks to players of the People’s Postcode Lottery.


Google is working with the Trust to encourage people to discover and enjoy the wildlife along their local waterway by literally putting towpaths on the map – Google Maps.


And The Co-operative Bank will offer those who enjoy or live on the waterways the option of supporting the conservation work of new Trust through everyday banking products.


For details of the Canal & River Trust, including how to visit, volunteer or donate see
www.canalrivertrust.org.uk.

·         Llanbogger comment: So much time, money and effort has been lavished on getting our canal network flowing beautifully again over the past 30-40 years, it would be a pity of this move did anything to sink that.
·         Keeping our canals flowing will take money. It is to be hoped enough money can be raised by this new charitable organisation.
Posted by llanblogger at 9:47 AM