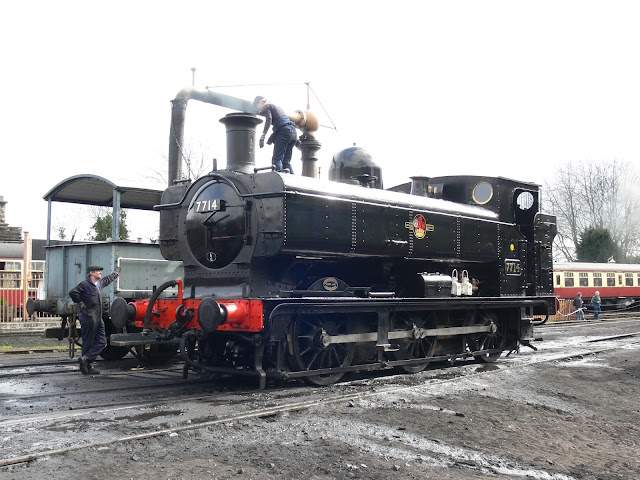 * Pannier Tank engine No. 7714 will be a star of the railway's Autumn Steam Gala.


Llangollen Railway has signed up a second venerable guest engine for its popular Autumn Steam Gala.


Already booked to appear at the three-day event, which runs over the weekend of October 12, 13 and 14, was the former Royal Train engine BR Ivatt 2MT No. 46521, courtesy of the Great Central Railway.


But organisers have now also managed to secure an appearance by the pannier tank engine No. 7714 away from its usual home at the Severn Valley heritage railway.


Built for the Great Western Railway, these pannier tanks were regularly used on local freight and passenger workings.


No.7714 is an old friend of Llangollen Railway, having been based at Birkenhead from 1937 until 1958 before moving briefly to Wrexham's Rhosddu shed prior to withdrawal.


This interesting old engine will be starring alongside another visiting 'local loco', Ivatt No. 46521.


A one-time hauler of the Royal Train, this locomotive spent almost its entire working life in Wales and was allocated to Oswestry, Brecon and Machynlleth steam sheds during its career.


No. 46521 was also regular sight around Barmouth during the 1950s and 1960s, working trains along the Cambrian Coast route and the regular shuttle service up the Mawddach estuary to Dolgellau.


Llangollen Railway’s ‘Along Cambrian Lines 2‘ gala will be a celebration of the much-loved trains heading for the seaside during the 1950s and early 1960s.


The visiting locomotives will be supported by members of the Llangollen’s home fleet, recreating many of the authentic sights and sounds of the era.


Attractions for the weekend include:


* Interactive activities for all the family, including ‘Make your own Luggage Labels‘.

*  A display of entries for the railway’s 2018 ‘Steam Trains to the Seaside‘ children’s poster competition.


A special exhibition telling the story of some of the viaducts, road bridges and station buildings along the line will be running in the Henry Robertson suite at Llangollen Station throughout the gala weekend.
The full working timetable will be available free of charge to holders of travel tickets for the event from all the booking offices at the railway while stocks last.


* For more details and to book tickets, go to: llangollen-railway.co.uk/event/autumn-steam-gala-12th-14th-october/
Posted by llanblogger at 6:41 AM