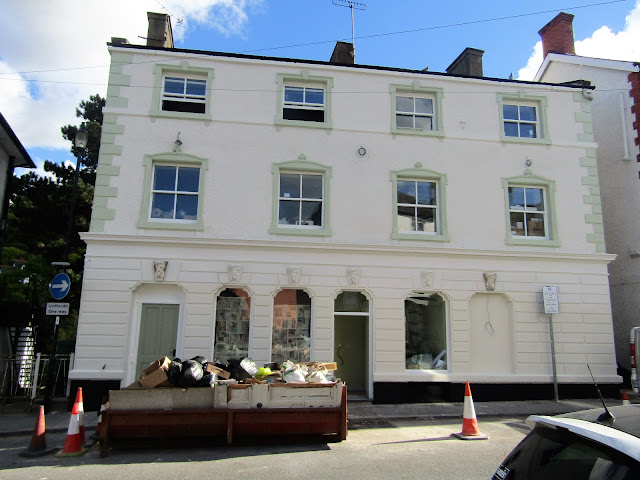 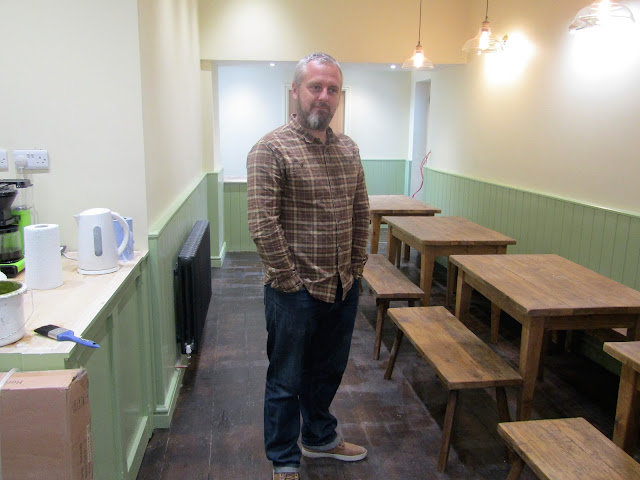 * Craig Forde in the coffee shop-tearoom with its hand-made furniture and fittings. 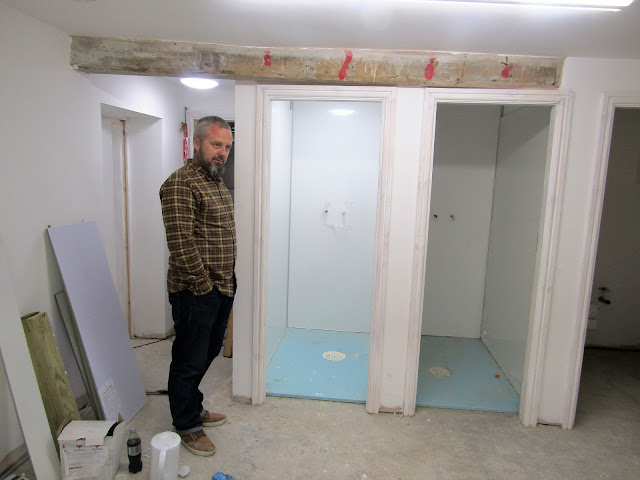 * One of the shower suites housed in the basement. 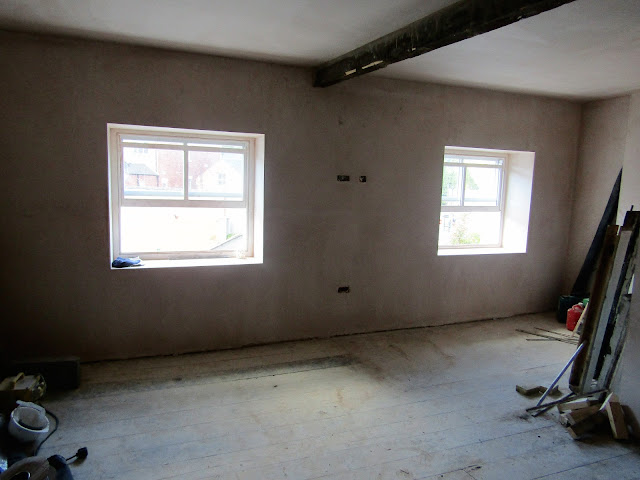 * The large front en suite including an original 1830 ceiling beam. 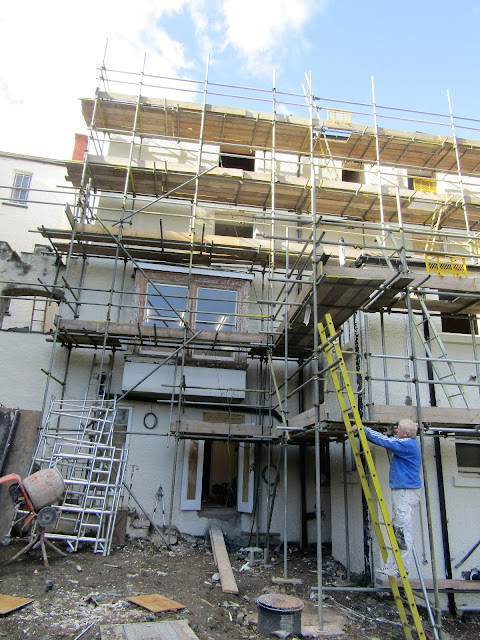 * Extensive work goes on at the back of the building.


A MAN who originally came to work in a Llangollen youth hostel and liked the place so much he’s stayed 21 years is now putting the finishing touches to his “dream” business in one of the town’s old banks.


Craig Ford and his team of contractors have spent the past eight months ripping apart and rebuilding the former HSBC in Bridge Street as an impressive new enterprise called appropriately Riverbanc as it backs directly onto the mighty Dee.
The imposing five-storey building, which dates back to 1830, was vacated after protests by local people in February 2014.


But it’s now been given a fresh lease of life and is a major investment by Craig and his wife Hannah who is also his business partner.

Its many internal rooms have been thoughtfully planned to accommodate two separate operations – a coffee bar/tea room complete with its own chef and a new home for the Fordes’ existing and thriving outdoor activities companies, Whitewater Active and Safe and Sound Outdoors.
Craig is originally from Newcastle-upon-Tyne and worked in various places around the country until he signed up for six weeks as an activity instructor at the former Llangollen Youth Hostel, then located at Tyn Dwr Hall, back in 1997.

He enjoyed being in the area so much he decided to stay and settle down, splitting his year between working at restaurants in the Alps in winter and Llangollen in summer.


Deciding it would be perfect for his requirements he made his pitch for the old bank building not too long after it went on sale and eventually sealed the deal in March last year. However, it wasn’t until last Christmas that he finally secured planning permission for the ambitious scheme he had in mind.
A team from G Construction based in Weston Rhyn moved in to start the massive facelift job last February and are now coming to the end of the project.


Craig said: “We’ve virtually ripped the place apart but in the most sympathetic way possible, preserving parts of the old building such as the huge original oak beams in a number of places and, of course, the huge steel-doored safe which we’ll use as a storeroom.
“The place had always been a bank, starting off as a branch of the North and South Wales Bank and going through various incarnations over the years.


“We’ve renewed about 70 per cent of the floor and taken all the walls back to the brick, putting in proper insulation. It’s a traditional build but done up to modern standards.”
It might surprise some people to learn that because of the way the building is terraced down towards the river at the back, it has large cellars on two levels – both virtually unused during bank days


The upper part of the basement will be used for storing equipment for the activity centre and there are also be changing rooms along with two sets of showers and toilets. At the rear this area sweeps out through a door onto a picnic area.
The lower cellar will be another storage area, mainly for wetsuits connected with the activity business. Again, leading off will be another patio area.


Pride of place back up at street level goes to the coffee shop/tea rooms which will run independently from the Fordes’ other business.
Seating 30 in the front and another 30 on a deck over the river, this has been smartly fitted out with counters hand made in the shaker style and heavy wooden benches specially crafted for Craig.


From its fully-fitted kitchen it will serve breakfasts, lunches and brunches prepared by resident chef Alison Evans who has worked at a number of eateries in the Llangollen area, including the Bryn Howell where she trained under the famous Dai Chef.
While customers will feed into the new eatery through the front door of the former bank a new main entrance has been created – out of what was the manager’s office - just along the front of the building for the activity business customers, who will also be able to gain access along a passage leading to another door at the side.


Craig said: “The bedrooms, half of which overlook the river and the other half the street, would ideally suit our activity customers but are really for everyone.
“I believe there’s a definite lack of accommodation in Llangollen, where for seven or eight months of the year most places are fully booked. I wanted to try and do something about that.”


Craig has created five new jobs with his enterprise, which includes four in the coffee shop/tea rooms over the winter and six on the activity side.
He said: “We started our activity businesses 15 years ago but have been renting in various places like the Malthouse in Regent Street and premises in Castle Street since then.


“It was always my dream to have somewhere we owned where we could put our own stamp on things – I just didn’t think it would be this big!
“But it actually ticks all our boxes and there are so many things we can do with it. It’s in a fantastic place right next to the new Centenary Square and the river.


“It’s also a beautiful building of which we’ve tried to keep as many features as we could.
“It’s now my aim to make it a local hub so everyone can come along and enjoy it”


Craig says he’s aiming to have Riverbanc fully open and ready for business by early next month.
Posted by llanblogger at 12:35 PM