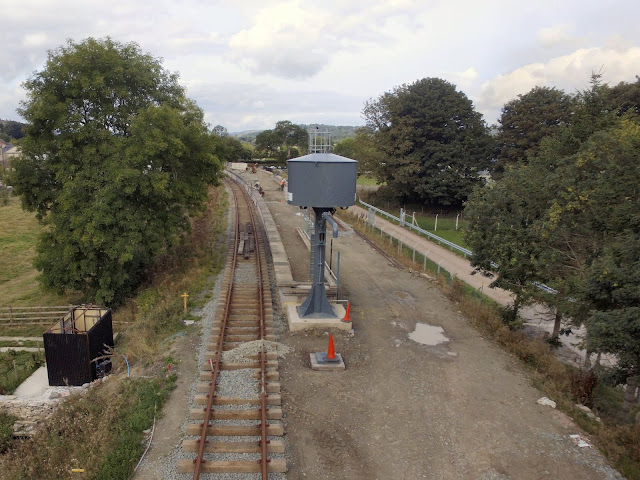 * Looking west with the water tower.

Llangollen Railway volunteer Dewi Davies used his drone to take some high-level pictures of the
Corwen station works site at the end of August.

They show how much civil engineering has taken place to alter the former single line embankment to accept the need for an island platform set within the two lines which form the terminal loop.

The first picture views the site from the west, Green Lane end, looking towards Carrog and shows the platform construction with the subway access in the foreground.

The wall for platform 2 on the right is complete and the wall for platform 1 on the left is under construction. The area in between is  being infilled and compacted with spoil to a depth of 5ft. When complete, the area will need to be paved to provide for a surface suitable for passengers.

All this work is being undertaken by the project's team of volunteers, aided by contractors as necessary.

The cost of the platform infill is being meet through donations to the Tenner for a Tonne Appeal which, so far, has raised nearly £10k and remains open for further support to the Corwen Central Railway Project c/o 'Dolwen', Bryn Eglwys, Corwen LL21 9LY.
It is intended that the area around the subway will be provided with a canopy and installation of heritage style of columns will be a task for the future. In the meantime, the set of eight columns have been cleaned up and conserved by a Llangollen Railway volunteer.

The passenger facilities and the booking office will be provided in a temporary building now on site below the embankment which is externally finished in a railway livery of brown and cream with a new water proof roof attached. The internal layout will be organised by Corwen station staff during the coming winter in time for the opening next year on a date to be announced.
The second picture views the site from the east end looking towards the recently installed water tank as constructed by contractors at Rhosllanerchrugog earlier this year. The tank will receive its water supply from a nearby borehole situated in the pumphouse on the left.

The area in the foreground will shortly see the installation of the track work to complete the loop line and connection to the track in platform 2 on the left. Completion of platform 1 to the right of the water tank will follow.

However, before this work is tackled, it is necessary to bring in the signalbox cabin from its storage place at Carrog and mount it on the prepared base to the right of the site - a job for the autumn.
Completion of this work during the autumn will eventually allow for the gap in the embankment behind the camera to be infilled and the 150 yards connection made to the railhead at Dwyrain Corwen East temporary platform. Ballasting and tamping of the new track layout will then follow before it is declared operational next year.

Subject to completion of the outstanding work, and the continuing provision of resources - manpower, materials and finance - the aim is to open the terminal in 2019. Then a basic station facility will be available for trains to stop adjacent to the town's car park and bus interchange.
With a stop-over time in the station of 20 minutes, whilst the locomotive detaches and runs round to reconnect at the rear of the train, passengers will have time to alight relative to the town centre.
A Llangollen Railway spokesman said. "For 2019 the need is to attract further passengers to join the train at Corwen from a new segment of the tourist market in North-west Wales and beyond.

"Additional passenger numbers travelling on the Llangollen Railway through the Dee Valley Area of Outstanding Natural Beauty is key to the continuing success of the line, justifying the considerable expense which the extension of the line from Carrog has involved over the past eight years of its construction.

"As with other heritage railway schemes, the initial basic facility at the Corwen station will be enhanced as resources allow with the eventual provision of a purpose built station building, subject to obtaining planning consent and grant aid."
Posted by llanblogger at 7:26 AM