The third annual Llangollen Round Challenge scooped a record £65,000 for Cancer Research UK.

About 400 walkers from across Britain slogged it out in the gruelling challenge on the weekend of June 2 and 3 with the aim of covering a tough 35-mile course through the hills around the town in either one or two days.

About 200 of the intrepid trekkers did it in just one day, with Anton Wouters from Ellesmere in Shropshire recording the best time of seven hours and seven minutes.

“As well as local people we had walkers from right across the country, including London, Dorset, Somerset, Cambridge and Glasgow. They ranged in age from 15 to their eighties and there were a number of family groups involved.

“Helping to make everything go smoothly was over 100 volunteers who took on tasks such as marshalling, manning checkpoints around the course, driving, catering and administration.

“We also received strong support from a number of local firms such as Spar and Aldi in Llangollen, Tesco at Cefn Mawr, Nisa Store in Ruabon, Arla Cheese in Oswestry, Warburtons and Severn Trent Water.

“I’d like to thank everyone who took part in the challenge and the volunteers for all they did to make the event such a big success.”

James Rogers, local fundraising manager for Cancer Research UK, came over to Llangollen from his base in Herefordshire to receive the £65,000 cheque from the challenge organisers.

A book detailing the Llangollen Round, all proceeds from which go to Cancer Research UK, is available priced £7 including P&P. It can be ordered online at: http://www.thellangollenround.info/how-to-order.html 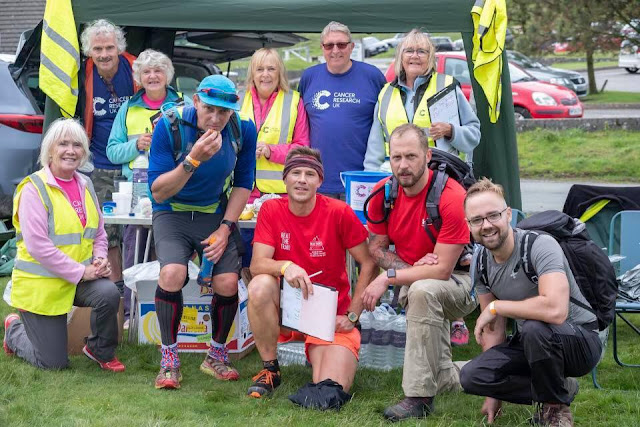