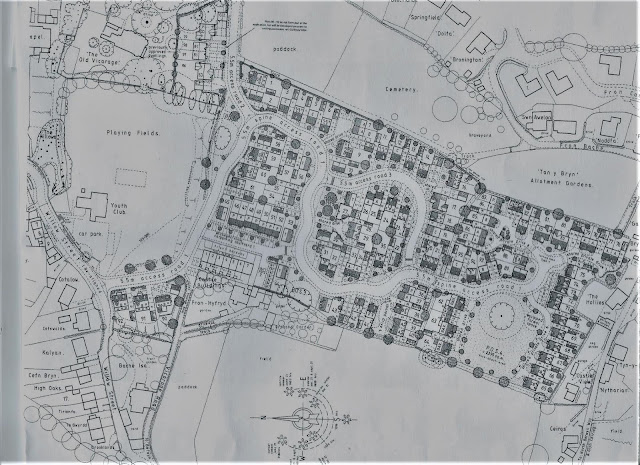 * A site plan of the development, with Willow Street on the left and the cemetery
in the middle top.

llanblogger has been given an exclusive insight into the £25 million new homes development planned for land off Vicarage Road in Llangollen.


Earlier this year Wrexham-based family building firm SG Estates acquired the 10-acre site from the Castlemead Group which secured planning permission for the scheme in late 2016. 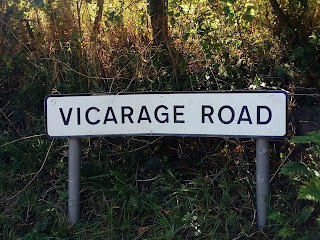 Castlemead completed a small number of houses on a section of the site but not before it had run into a storm of criticism from a well-organised campaign group whose members objected to the wider development for the extra traffic it would create and the additional burden it would place on local services, such as schools.


There was particular concern about the timing of the construction of a new access road to the development, which opponents demanded should be finished before building work on the houses began.
However, Steve Griffin, managing director of SG Estates which bought the undeveloped section of the site from Castlemead last February, has given a pledge that the road, which will bring traffic up from the town centre, will be completed ahead of construction of the homes.


Mr Griffin said what his company now planned was the main body of the development and would include 95 units.

The extensive site stretches from Vicarage Road in the north towards Fron Bache in the south and from the cemetery and allotments and fields in front of them in the west to open fields in the east.
Nine of the properties will be affordable homes, in either two-bedroom mews style or semis, the occupation of which will be overseen by a housing association yet to be decided.

Sixty per cent of the rest of the homes will be either two or three bedrooms with the remainder four or five bedroom units.


Prices of the properties will range from £150,000 to half a million pounds.
Mr Griffin said that overall his company is pumping £25 million into the development – it’s yet to be given a d name – which includes a contribution of £47,000 towards the affordable homes and, as agreed within the original planning permission, a contribution of £173,000 to local education which schools can spend as they see fit.


He said: “I believe this will be particularly attractive to first-time buyers and young families.”
The landscaped site will feature four public open spaces with children’s play equipment and the main frontage is to be planted with oak trees.


First job, according to Mr Griffin, is to start work on the new access road within the next eight to 10 weeks.
The road will begin by branching off from Hall Street and lead into Willow Street which will be widened to 9.5 metres from its present 3.5 metres.


SG Estates has purchased parcels of land along the left hand side of Willow Street heading up from the town from both private owners and the local authority to enable the widening operation to take place and no properties are affected.
The new road heads on past the youth centre where the company will upgrade the car park and put in four extra parking spaces.


The road then branches off left on a new section across the adjacent field. It follows the line of Vicarage Road into the housing development before joining up with the existing new section of road outside the homes built by Castlemead.
The original and narrower Vicarage Road will become a cycle path and pedestrian walkway.


Mr Griffin revealed that the new road and the diversion of services into the development site is costing £1.4 million.
He assured that construction work on the new homes would only start after the access road is finished which he estimates will take about 12 weeks.


He is therefore aiming for building work to start around next February with the first batch of new homes being ready for occupation in the late summer of 2019. The entire development will take just over four years, he added.
Before the road project starts he has promised full consultation with affected residents and their local council representatives.


Mr Griffin, whose background is in building, said: “This is a very exciting time for the company, which we started in 2004.
“We have ongoing developments in Pont Adam, Ruabon and The Pavilions, Gresford, but this will become our biggest site and the overall cost of £25 million represents a very big investment for us.


“Our watchword is quality and we regularly win quality awards from local authorities.
“The Llangollen development will be beautiful when it is finished and I believe it will add vibrancy and bring a fresh outlook to the town, which I love to visit.


“Possibly, when we move onto the site and take a closer look at density the number of units in the development could be reduced at the southern end towards Fron Bache.”
Posted by llanblogger at 1:17 PM