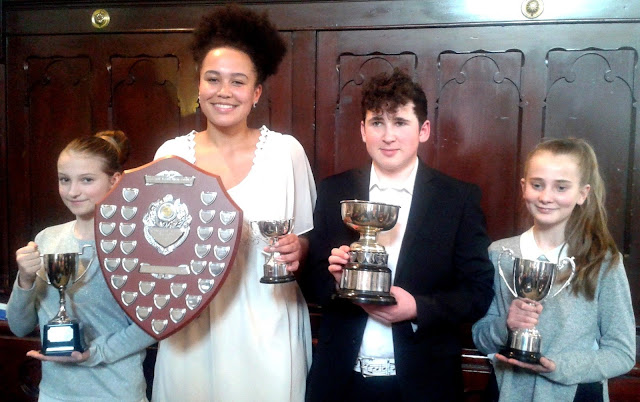 Baritone player Elizabeth Mwale claimed the Oswestry Cattle Auctions Shield for soloists under 15 years old, with her performance of Donegal Bay by Paul Lovatt Cooper.
This also qualified her for a place in Sunday's Winner Finals, where she again finished in first place, earning her Oswestry Town Council's Junior Cup ( The Gull Award).
The Ysgol Morgan Llwyd student also received high praise from the competition's adjudicator, who commented that her moving performance made "the hairs on the back of my neck stand up."
Also winning their respective competitions were the following band members:
Cornet player Taya Castley, 13, and Elizabeth Mwale won The Melody and Metal Cup for Duets under 15 years, playing Pleasant Moments by George Hawkins.
Cornet player Millie Turner, 12, won The Vernon Carter Memorial Trophy for soloists 12 years and under, playing Over the Rainbow by Arlen.
Tuba player Gabriel Tranmer, 15,won The Bernard Mitchell Trophy for soloists 21 years and under, playing Andante and Rondo by Cappuzzi.

Llangollen Silver Band conductor, Trevor Williams, said: "Well done to all of our young players for putting in some wonderful performances against some tough competition. You did us proud!"

Meanwhile, band spokesman, Robert Stock, explained: "This is another fantastic set of results for our young players and is testament to the hard work they have put in preparing for this festival. We are extremely proud of all their achievements and they highlight just how bright a future the band has."
Posted by llanblogger at 6:46 AM