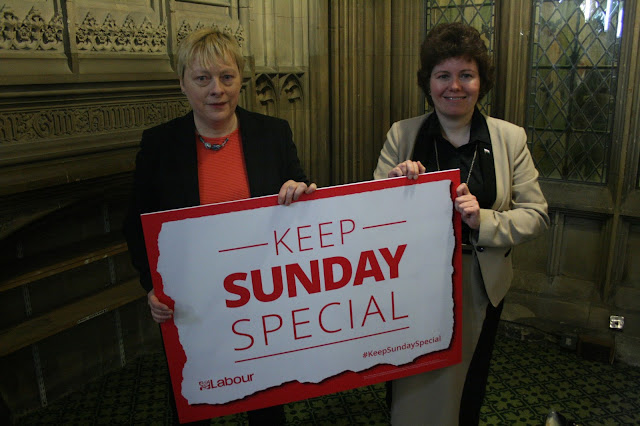 A local MP who last autumn urged the Prime Minister to think again about changing Sunday trading hours has said she is "delighted" with yesterday's Government defeat on the issue.
Speaking at Prime Minister’s Questions on October 21, Susan Elan Jones MP quoted Government retail sector champion Kevin Hawkins who described the current laws as “a workable compromise that most people seem satisfied with most of the time”.
The MP said: “There’s a balance to be kept here – between opening hours for big stores, the rights of small shops and the rights of shop-workers and their families to enjoy family life. The current laws are a good compromise that most people agree with. We should stick with them and keep Sunday special.”

The Clwyd South Labour MP also spoke in yesterday's debate in Parliament, saying there was an "unity" that brought together a huge range of MPs based on "support for family life, high streets and small shops; and against the exploitation of shop-workers."
SEE BELOW FOR NATIONAL MEDIA COVERAGE OF SUSAN ELAN JONES MP's QUESTION TO THE PRIME MINISTER:
http://www.telegraph.co.uk/news/politics/11946602/Strong-case-for-extending-Sunday-trading-hours-David-Cameron-says.html
http://www.acs.org.uk/press-releases/local-shops-pm-wrong-on-sunday-trading/
http://www.theguardian.com/business/2015/oct/26/sainsburys-chief-attacks-sunday-trading-law-change
http://www.christian.org.uk/news/pm-backs-calls-for-more-sunday-shopping/