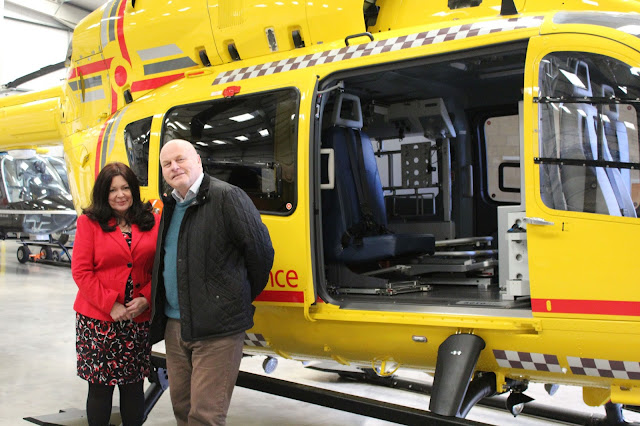 Wales Air Ambulance is to introduce a new fleet of custom-made aircraft which will significantly enhance its operations, the charity has announced.

Three new helicopters will be launched in January 2017 after a competitive tender process which drew international interest for Wales.

Wales Air Ambulance Charity will become only the third HEMS (helicopter emergency medical service) operation in the UK to use the new H145 aircraft.

Equipped for night flights, the upgrade to H145s will move the charity a step closer to its goal of providing a 24-hour air ambulance service.

The new aircraft will also have a larger cabin and more powerful engines, meaning there is extra room for treatments in-flight and the helicopters can fly for longer without refueling.

For the first time, the air ambulance crew will be able to send critical information about patients to medics waiting at hospitals via an on-board high-speed internet connection.

Angela Hughes, chief executive of the Wales Air Ambulance Charity, said: “Our new lease of helicopters will help us continue to provide one of the most modern HEMS services in Europe.

“It is hugely exciting that the Wales Air Ambulance Charity has had such interest from around the world. It demonstrates that what we are doing is truly pioneering, and we continue to lead the way in developing an advanced air ambulance service.

“Crucially, though, it is what the people of Wales are doing which is making all the difference. It is thanks to their support that we have been able to secure such advanced aircraft for Wales, and we need their help to keep the new helicopters in the air.”

She added: “Our new contract with Bond is fantastic news for the charity and a great way to mark our 15th year providing lifesaving emergency care.”

Wales Air Ambulance Charity will continue to operate its fleet of EC135 helicopters until the new aircraft begin operating next year.

Tim Shattock, Bond managing director, said: “This new contract will allow the Wales Air Ambulance Charity to bring a truly landmark air ambulance service for everyone in Wales. As part of Babcock, and through working closely with the charity we have been able to offer a really innovative service, bringing new aircraft, new technologies and new ways of working to this critical and lifesaving service.

“I am pleased we will continue to provide the Wales Air Ambulance Charity with the vital operations that are so important for the people of Wales.”

The three aircraft will operate from Wales Air Ambulance Charity bases in Welshpool, Caernarfon and its new headquarters in Llanelli.
Posted by llanblogger at 6:46 AM