Group to fly in from Germany for Operatic show 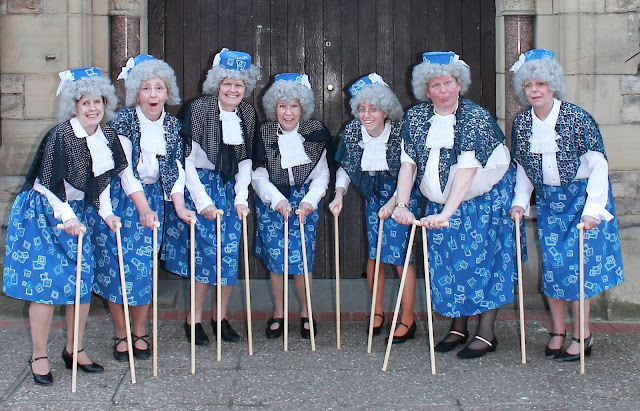 * A group of operatic members who appear in the show as frisky grannies try out their costumes outside Llangollen Town Hall.

A GROUP of Germans are planning to fly almost 700 miles to catch the latest show by Llangollen Operatic Society.

There are now just a couple of weeks to go until the curtain goes up on the first of six performances of Mel Brook’s smash-hit musical The Producers at Llangollen Town Hall.

Cast and crew are working hard to put the finishing touches to songs, dances, costumes and scenery and tickets are starting to sell like hot cakes as word spreads and information and action shots of rehearsals are shared on social media.

Society members were particularly thrilled to hear that four people are planning to jet over from Germany to catch the show.

A few months ago two people from Frankfurt, named August and Monika, who were spending time in Llangollen to arrange internships for students from Germany were in the town’s Corn Mill restaurant when a group of operatic members came in for post-rehearsal drinks.

After striking up a conversation, it became clear that The Producers was one of August’s favourite shows, so it was jokingly suggested to him he might to come back and see it when it’s staged next month.

Producer, Tracey Rawlinson, said: “I arrived at the pub to find a group of members laughing and joking with August and his colleague, trying to persuade them to come and see the show.

“Whatever they said, it worked as I received an e-mail from him a few days later requesting four tickets.

“The group from Germany are planning to stay at a local guesthouse and tour around the area for a few days before attending the Saturday night performance.

“We’re so excited to have international supporters and are looking forward to welcoming them back to Llangollen and hope they will join in our post performance celebrations.

“In his e-mail August said he was really looking forward to seeing the show so much that he was jumping for joy.”

The Producers will be staged at Llangollen Town Hall from April 12-16, starting at 7.30pm, and with a matinee performance at 2.30pm on Saturday 16th.

* Tickets are now available online at the following link:  www.ticketsource.co.uk/llangollenoperaticsociety.
Posted by llanblogger at 6:38 AM