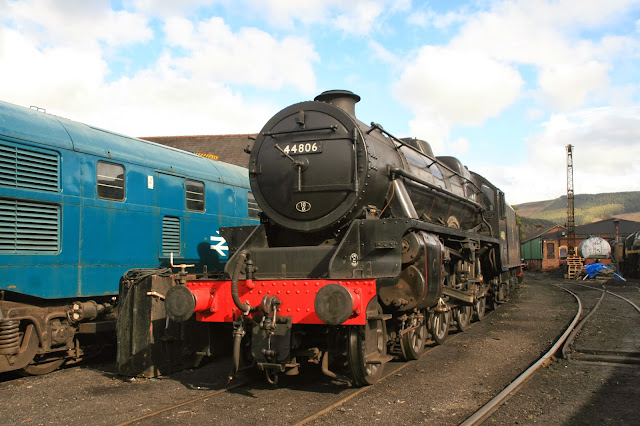 * Bowing out - the Black Five locomotive.

Llangollen Railway has arranged a special weekend of train activities to allow steam buffs to say a fond farewell to the Black Five locomotive which is due to leave the Dee Valley line.
After being associated with the Llangollen Railway for 20 years, the engine, No.44806, has been sold to new owners in North Yorkshire and is due to depart later in the month.
George Jones, for Llangollen Railway, said: “No.44806 has been a firm favourite with steam fans throughout its stay with us.
"It came to Llangollen in 1993 after a period on static display in a museum, but boiler repair work allowed the engine to return to steam for an active life.
"It has been a reliable workhorse and will be much missed when its operation at Llangollen ends with a celebration on Sunday, January 5.
“The class of Black Five locomotives, as developed by the London Midland & Scottish Railway, operated the length and breadth of Britain in British Railways days, although they did not feature on the Ruabon to Barmouth route which was a Great Western line.
"It is only in preservation days that the type has been seen at Llangollen and proved equal to the task of hauling trains on the gradient towards Carrog.”  He added: "As part of the farewell weekend the railway is offering an intensive service of trains with two other steam locomotives supporting the Black Five, a diesel locomotive and a rail car offering a variety of travel options, as well as a demonstration freight train.
"The Winter Warmer event will appeal to steam buffs and others who may be at a loose end in a period when little else is in operation and looking for a day out as well as a farewell opportunity."
* More details at: www.llangollen-railway.co.uk
Posted by llanblogger at 7:51 AM