Over 460 drivers in Wales were caught over the drink drive limit during the All Wales Christmas Anti Drink and Drug Driving Campaign.
Throughout the month-long campaign 35,255 drivers throughout Wales were breath tested between 1st December 2013 and 1st January 2014. 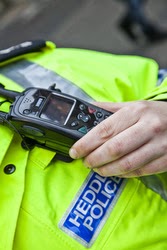 North Wales Police carried out 18,159 breath tests with 107 being positive. In Dyfed Powys a total of 11,281 breath tests were carried out, with 161 being positive. In Gwent officers tested 2,470 drivers, with 39 being positive, and South Wales Police administered 3,345 tests with 158 positive results.
Some of the highest readings recorded during the campaign in North Wales were 133, 129 and 124 – the legal limit is 35 micrograms of alcohol in 100 millilitres of breath. All three individuals have been charged and have appeared/are due to appear before the courts.
The campaign was launched with support from the family of Kieran Lea Arnold, who was tragically killed following a road traffic collision by a drink driver who was twice the legal limit last June.
The 21-year-old plumber sustained fatal injuries during the two-vehicle collision which happened on the A541 Pontblyddyn to Caergwrle road.
As a result of the collision 48-year-old Robert Bryn Williams was sentenced to five years four months imprisonment and was banned from driving for three years.
Speaking on behalf of the Welsh forces, Deputy Chief Constable Gareth Pritchard said: “Although warnings were issued throughout the campaign 465 drivers throughout Wales chose to ignore those warnings by risking their own lives and the lives of others by breaking the law. This is very disappointing.
“It is also astonishing to see that some were almost four times the legal limit. It is clear that these individuals showed a complete disregard for the safety of other road users as well as their own.
“Driving with excess alcohol or under the influence of drugs is not just a criminal offence but also completely unacceptable.
He added: “However, drink driving is not just about Christmas. It ruins lives all year round. Perpetual drink drivers will choose to drink and drive any day of the year so we need support from the public 365 days a year to help us take these people off the roads of Wales.”
If you have information relating to someone you think is driving whilst under the influence of alcohol or drugs, please contact North Wales Police on 101 or via Crimestoppers anonymously on 0800 555 111. In an emergency always dial 999.
Posted by llanblogger at 8:09 AM