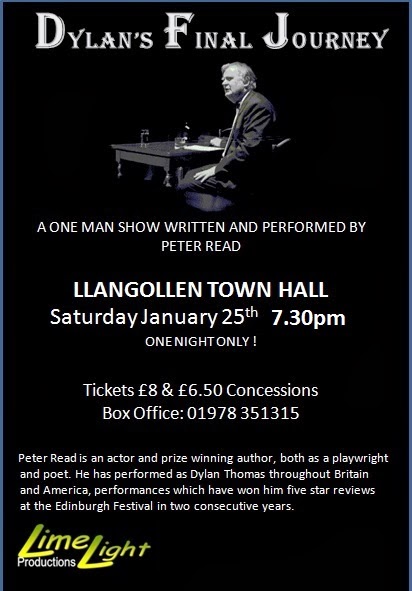 For its latest production in Llangollen the LimeLight theatre group presents Dylan's Final Journey, a one-man show written and performed by Peter Read.


Telling the story of Welsh poet Dylan Thomas's last few days, the play starts in his “lovely, ugly” home town of Swansea and follows him through some of the journeys he made, culminating in his final one to New York  in 1953, where he died.

We see him leave Aberystwyth in the pouring rain to start his project of walking through Wales.

The mission is aborted after a couple of pints and the sighting of a queen rat.

We then travel with him to the “insane city” of London, which he claimed “smelled of goat.”

In the capital he meets Caitlin and several members of the drinking literati.

In New York he is chased by a secret  detective and finally collapses after proudly announcing he has drunk eighteen whiskies, which he believes is a record.

Peter Read is an actor and prize winning author, both as a playwright and poet.

He has performed as Dylan Thomas throughout Britain and America, performances which have won him five star reviews at the Edinburgh Festival in two consecutive years.

Dylan’s Final Journey is for one night only at Llangollen Town Hall on Saturday, January 25 at 7.30pm

Tickets for LimeLight’s  next production, Billy Liar, directed by Peter Read, from March 20 to 22 , can also be purchased from the box office.
Posted by llanblogger at 8:05 AM