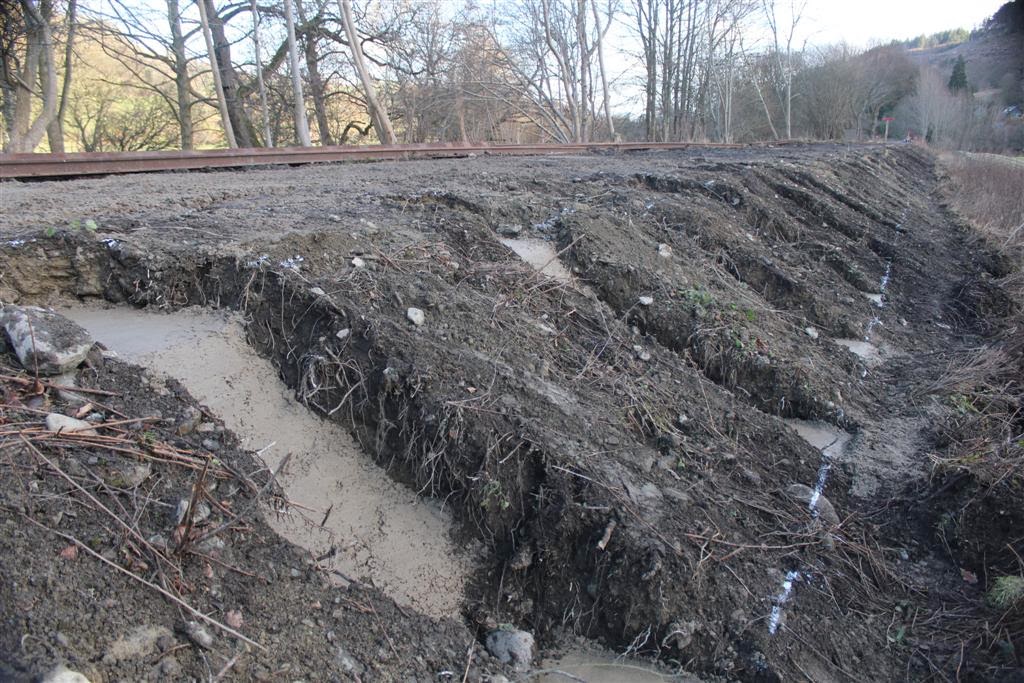 * A view from the site of the buffer stop looking east towards Carrog.

Llangollen Railway is inviting people to join a walk to view the extension of its track to Corwen on Saturday, February 1.

Railway spokesman George Jones said: “Although the weather forecast for next weekend seems rather undecided, in the expectation there is no snow in the offering, an escorted walk is being arranged for a party to view progress on the track extension project as it nears the last half mile into what will be Dwyrain Corwen East.
“The party will get away from Carrog station at 11.45am, following the arrival of the first train of the season - a DMU service from Llangollen.
“The route will be via the riverside path, crossing the railway and going up on to the main A5 road then along the pavement to Bonwm where the new track comes into view.
“Continuing along t he A5, the track extension is visible as far as Over Bridge 28A, hence the trackbed clearance activity through to the outskirts of Corwen.
“From here the site of the platform is now evident with the footings in place and the progress with the flood relief scheme works.
“The walk will end at the car park from where a Route 5 bus ride back to Carrog is available at eight minutes past the hour, allowing perhaps for refreshment in the town. This is the option to see where the trains will run and terminate later in 2014.
“The distance of the walk is about 2.5 miles, duration with stops for viewing/information of perhaps 100 minutes.
“Stout footwear and weatherproof outdoor clothing essential, and yellow hi viz vests may be appropriate for some of the party to wear on the main road stretch where the pavement is narrow and requires single file progress. The footpath conditions may be boggy in parts.”
Those interested in joining the party are asked to advise their attendance by email to: llangollen.railway@btinternet.com for a final confirmation to be sent.
Work on the footings for the site of the phase 1 station at Corwen was completed on scheduled by the contractor last week.
Sixty-six concrete footings are now in place on the embankment.
The work now awaits the laying of base ballast and the track panels, after which it is expected that platform sections will be delivered by rail for erection on site.
Posted by llanblogger at 7:43 AM