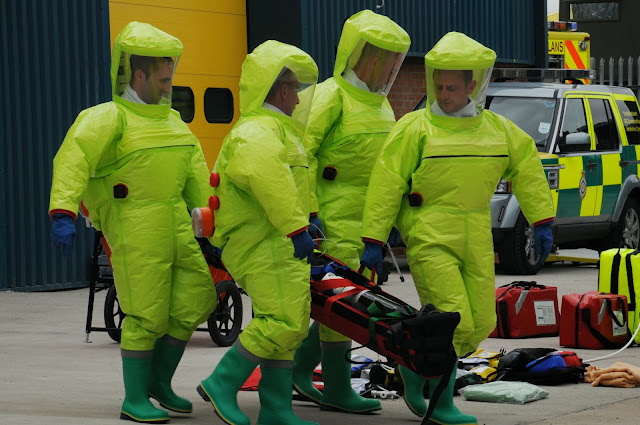 * Members of the Welsh Ambulance Service’s HART team on a training exercise.

A SPECIALIST team of ambulance staff trained to provide life-saving care at major incidents has dealt with more than 2,300 emergency calls since its creation last year.

The Hazardous Area Response Team (HART) - which is part of the Welsh Ambulance Service - provides clinical care in hostile environments like industrial accidents and natural disasters, as well as chemical, biological, radioactive, nuclear and terrorist incidents.

Of the calls dealt with since its launch, more than 40 involved flooding, a further 40 involved a firearm or other weapon, and more than 140 meant working at height, in a confined space or on tricky terrain.

Staff are deployed to major road traffic collisions, like the one outside Rhws Primary School in June, in which nine people were injured, and large-scale fires, like the one in Clydach Vale in March, which left a former workingmen’s club destroyed.

The team was also involved in the multi-agency search for missing schoolgirl April Jones in Machynlleth last October.

"HART in Wales is part of a UK network of HART teams, whose members are skilled ambulance professionals with additional training.

"Throughout the year we’ve attended a number of challenging incidents where, in partnership with other agencies, our training and equipment has helped to get access to a patient and support our operational crews.”

The Bridgend-based HART complements the existing Special Operations Response Team (SORT), whose members are trained to provide decontamination and mass oxygenation at such incidents.

The specially trained personnel work 24/7 across Wales, and can also called upon to give clinical care to patients outside of a major incident.

“We hope that HART is not in serious action too often, but knowing that they exist here in Wales gives us all some peace of mind that their expertise is available if and when they are needed.”
Posted by llanblogger at 3:10 PM