A town councillor wants to know why there aren’t more flashing 30mph warnings signs on busy roads in Llangollen. 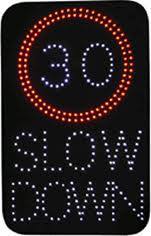 He said: “I’d like to know why there aren’t more of the flashing 30mph signs locally.
“There’s the one near the Woodlands but in no other areas of Llangollen. Why can’t there be one near the Pengwern play area?”
Town clerk Gareth Thomas said: “We raised this with Denbighshire County Council last year and were told there was no chance of having flashing signs because of the cost.”
Mr Thomas then suggested that in other areas there had been community campaigns in which local residents had donned high-visibility jackets to monitor speeding cars, passing on the details to the police.
He added: “Maybe that is something we could do and involve the local schoolchildren.”
The mayor, Cllr Bob Lube, said he believed one of the residents’ campaigns the town clerk was referring to had taken place at Petrefeolas.
But he said: “I suspect that somebody going past a 30mph sign isn’t going to be put off by a flashing 30mph sign.”
The town clerk agreed to check out the possibility of more flashing signs with the county council.
Posted by llanblogger at 8:02 AM