"Get on with new health centre" councillor tells planners 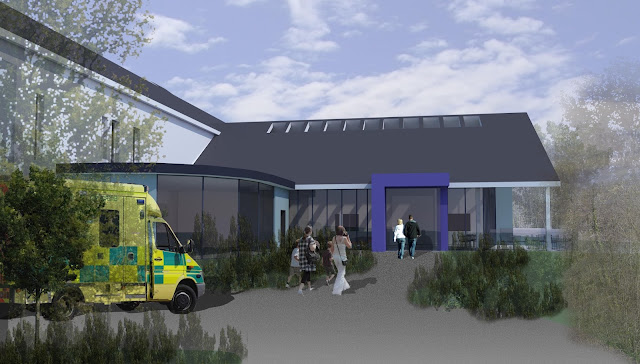 * An artist's impression of the new health centre.
A councillor sent out a strong message to the planners of a new £5.5 million health centre in Llangollen – get on with it!


Cllr Stuart Davies, one of the town’s representatives on Denbighshire County Council, was attending the latest in a series of five meetings arranged to update stakeholders on the scheme at Llangollen International Pavilion on Wednesday afternoon.
Managers from the Betsi Cadwaladr University Health Board (BCUHB), which is building the new facility to replace Llangollen Cottage Hospital which they axed last March, were there to brief around 30 people with an interest in the project, including representatives of local health organisations, patients and voluntary groups.
Project manager Ian Howarth invited discussion on issues such as access to the site of the new centre, on land between the River Dee and the A539 currently occupied by the derelict River Lodge, and whether a pharmacy and a dental surgery should be included in it.
Mr Howarth also outlined the timetable for development, which he said would see an outline business case being considered by the health board in November, a full case being produced next March and building work starting next summer with completion during 2015.
But Cllr Davies declared: “Let’s stop fannying about and get on with it. People want it!”


Mr Howarth replied: “We are all of the same mind, that we need to get on with it.”
Earlier in the two-hour meeting, BCUHB’s estate development Andy Williams said that “an awful lot of work” had been going on into site investigation, working with the local highways department.


He told the audience: “We accept that access to the site isn’t good and over the last two or three months we have been looking at the main issues such as the maintenance of existing footpaths, moving the 30mph zone, which currently starts closer to the town, to the far end of the River Lodge site and extending street lighting in that area.
“We have also been talking to local bus operators about putting bus stops adjacent to the site as buses won’t be able to get right into the site because they are too large.”
Cllr Davies suggested that rather having people walk to the new centre along the busy A539 road, it might be possible to develop a route leading down the steps from the river bridge and through an adjacent car park.
Andy Williams said this would be looked at by the project team.
On the question of including a pharmacy in the new centre, Ian Howarth said there were arguments for and against this.
There were suggestions from the audience that if Rowlands, which currently runs the pharmacy in Regent Street, moved to the health centre the current chemist would be lost as the company might not be prepared to run two shops in the same area.
This, it was said, might lead to people needing frequent repeat prescriptions having to walk to the other side of town.
But  a representative of Rowlands in the audience said it might be possible to set up a prescription delivery service or a system of ordering repeat prescriptions over the phone.
The issue of the whether a two-chair dental surgery should be included in the new centre was then touched on with Mr Howarth pointing out that there were points for and against it. But he said there might be a need for this as Llangollen currently had only one dentists.
However, he suggested further discussion of this would have to wait until the next stakeholder meeting as there was nobody present from the dental service.
At the start of the meeting there was some criticism of BCUHB for the way the cottage hospital was closed and services transferred to the existing health centre in Regent Street.
Cllr Davies said: “It wasn’t advertised enough so people weren’t aware of what was happening.”
He also asked if the minor injuries unit, which had been moved over from the hospital to the health centre to be run by the GPs based there, was still in operation.


Practice manager Tessa Orton Jones said it was but that it was restricted to Llangollen residents and genuine day trippers to the tourist town.
Some concern was voiced from the audience that this excluded children attending local schools who lived outside the town and residents of nearby Corwen.
Cllr Davies told the BCUHB team they had “messed up good style” by removing in-patient beds from the old hospital and making no provision for replacements in the new centre.
This, he said, was already “coming home to roost” with local people in need of beds being sent to  Deeside, Mold and Flint.
Mr Howarth told him: “We’ll make sure we follow that up.”
Cllr Davies then asked him if there would be beds in the new centre to which Mr Howarth replied: “It terms of this development it doesn’t make sense.”
Posted by llanblogger at 9:42 AM