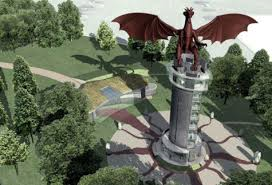 * An artist's impression of the dragon scheme.

The man behind the £4 million plan to build an 80ft tall bronze Welsh dragon and cultural centre near Chirk is offering people a chance to buy into the scheme.

Simon Wingett is launching a loyalty card scheme giving investors a lifetime of discounts for a one-off fee of £95.

Mr Wingett says he has had to scale down the ambitious project, earmarked for land off the Halton roundabout, to fit in with the “risk adverse” nature of financing during the the credit crunch.

The Erbistock-based art dealer officially unveiled his Waking the Dragon project on St David’s Day in 2011.

His aim has been to create a Welsh cultural icon on one of the main gateways to the country close to the A5.

Mr Wingett believes his brainchild will create up to 80 jobs and attract visitors from across the globe.

It is also planned as a lasting tribute to his late father, well-known local businessman Frank Wingett, who died from throat cancer in 1988, and raise £1 million a year, with all entrance fees going to the Frank Wingett Cancer Appeal.

Soon after its launch the project took a major leap forward when Wrexham Council agreed to grant an option on the land at Chirk Park to the Frank Wingett Cancer Appeal.

Mr Wingett had envisaged the entire cost of the project would be raised from commercial sponsorship and charging people £2,000 for a personal dedication on each of 416 steps inside the structure.

But he now reveals the tough financial climate hoas forced him to scale back the scheme.

Mr Wingett said: “I am launching a loyalty card scheme based on Brewdog of Scotland’s highly successful Venture (Equity for Punks).

“This will offer for £95 a lifetime of discounts across the food, drink, event, merchandising and more.

“Based on crowd funding, this innovate scheme will help raise the minimum of 50 per cent private equity and investment needed to unlock Visit Wales finance (SME Fund) and high street bank funding to realise the scheme.”

Mr Wingett says that integral to the plans are a Welsh centre of excellence, farm shop, cosmopolitan café bar, art gallery and tourism and business hub.

He added: “This one-time donation will not only help us secure this astonishing landmark but create a most exciting and significant UK tourist destination and signpost.

“By helping the project people will also help cancer sufferers across Wales.

“A small car park charge will in perpetuity go to Marie Curie giving every person help towards the right and dignity to die at home.

“The colossal statue will stand majestically astride a 50ft hill looking across England and beyond.

“Accessible by a double helix pathway up to a viewing platform and the dragon’s talons,  the dragon will be surrounded at the base by 11 stone monoliths creating one of the first standing stones in Wales for thousands of years.

“Each monolith will represent one of the 11 stories in one of the world’s most famous fairytale collections, The Mabinogion.

The landscaped gardens will also be home to a large covered amphitheatre to stage education, theatre and other workshops.

“They will be home to a sculpture park showcasing national and international works  unseen in Wales before.

“When the project is underway 80 full-time jobs will be created.  There will be many more construction jobs utilising some of the most skilled labour force in Britain.

“Waking the Dragon will complement the area’s rich and diverse culture and heritage, including the World Heritage site at Poncysllte Aqueduct, Chirk Castle and Erddig, acting as a beacon to strengthen its national identity based on its roots. “