Firefighters will strike over pensions for four hours today (Wednesday).

The Fire Brigades Union says almost 80% of its members voted in favour of industrial action in a ballot that ended earlier this month. 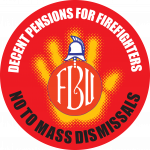 "Firefighters could not be more serious about protecting public safety and ensuring fair pensions. Governments in Westminster and Cardiff have simply refused to see sense on these issues.

“It is ludicrous to expect firefighters to fight fires and rescue families in their late-50s: the lives of the general public and firefighters themselves will be endangered.

“None of us want a strike, but we cannot compromise on public and firefighter safety.”

The strike will take place for four hours, between noon and 4pm.

The FBU says that the government’s own figures have shown that thousands of firefighters could face the sack without access to a proper pension simply because they are getting older.

In a statement the union says: "A recent government review found that over half of current firefighters between the ages of 50 and 54 are no longer able to meet fire and rescue service fitness standards for fighting fires. Beyond the age of 55, two thirds fail to meet the standards.

"Although the government has previously claimed that older firefighters could be moved to less physically demanding roles, FBU research found only a handful of ‘redeployment’ opportunities in fire and rescue services, meaning mass sackings would be inevitable."

Chief Fire Officer Simon Smith reassured the public: "North Wales Fire and Rescue Service has arrangements in place to continue to provide a service during strike action" but warned that, "because of the circumstances, services may be limited.

"The Service's business continuity arrangements will ensure a speedy and safe return to normal services on conclusion of any period of industrial action."
Posted by llanblogger at 8:01 AM