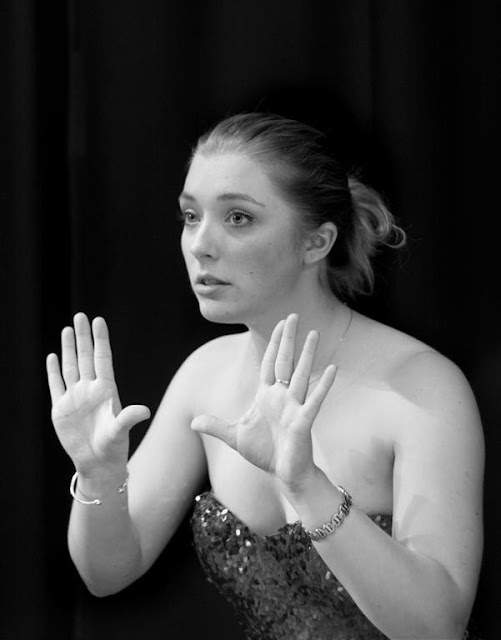 By day 23-year-old Anna Turner from Llangollen uses her dulcet tones to answer telephone calls for large businesses but by night she is using them in a very different way, wowing audiences at Wrexham’s Grove Park Theatre as the lead in their latest production, The Rise and Fall of Little Voice.

Anna, who works as a Moneypenny receptionist, has been acting since the age of 10, but this is the first time she has taken centre stage.

She began with the Llangollen Twenty Club and has also performed with Tip Top Productions and Suitcase Theatre Company.

The Rise and Fall of Little Voice, tells the tale of a young girl who is grieving over the death of her father.

She never leaves the house and barely speaks, while her larger-than-life mother, Mari, enjoys life to its fullest and mocks her daughter’s quiet ways.

The only way Little Voice is able to express herself is to sing along to her late father’s records, imitating icons such as Judy Garland and Marilyn Monroe.

One night, Mari’s boyfriend overhears Little Voice singing and cajoles her into performing on stage. Thus begins the rise, and ultimately, the fall, of Little Voice.

Anna says: “This is my first performance with Grove Park Theatre and my first ever time singing solo on stage.

"I was quite nervous before we started the show on September 5th but we have been receiving standing ovations so that feels amazing. There is something very special about performing and it’s wonderful to get to play such a fantastic character.”

The Rise and Fall of Little Voice is sponsored by Moneypenny and runs until September 14. Tickets are available from www.groveparktheatre.co.uk or the Box Office on 01978 351091.
Posted by llanblogger at 7:55 AM