The football-themed comedy play Dixie Or Me currently running at Llangollen Town Hall sees a theatrical hat-trick by Peter Read.


Not only as he penned this highly amusing two-acter, staged by Wrexham-based Limelight Productions, but he also directs it and takes one of the leading roles. 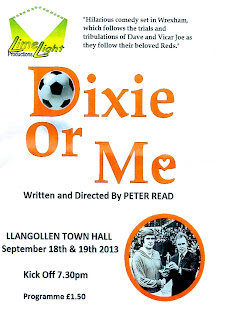 Peter explains in the programme notes - nicely headed Terrace Talk - that he wrote the play back in 2004 as part of a football festival organised by Wrexham Council but, as he constructed it, was mindful of the fact that too much football content could turn off people in the audience with no liking for the beautiful game. While it’s still very much about football he manages to keep it out of the penalty box as far as the uninitiated are concerned.


Action revolves around a simple fellow called Dave, played very effectively by Mark Andrew Rodgers, who has developed an absolute obsession with Wrexham FC as a way of escaping his humdrum production line job.
The author has set the play in 1978 as he believes that what the club was doing on the pitch in the 77-78 season was one of the best times to watch the Reds, when the famous Dixie McNeil figured large in their fortunes, and there are plenty of references to “going up, going up” in the dialogue.
Dave’s pre-occupation with Wrexham doesn’t go down at all well with his wife Holly who has her mind on higher things, such as the world political situation of the late 1970s, which was basically dominated by the actions of the United States.


These vastly conflicting interests lead inevitably to marital disharmony, with an angry Holly demanding to know at one stage whether it’s “Dixie or me?”
However, both have their allies: Holly in the shape of lefty NEWI lecturer Sarah, nicely caricatured by Lyn Aston, and Dave in the form of Vicar Joe, a man similarly obsessed with Wrexham FC.
The clergyman, brought vividly to life by the author, is himself in conflict with his Bishop for the way his own obsession with the Reds colours his work in the parish. Keith Pemberton is Joe’s suitably stern episcopal boss.


Holly reckons one way to cure Dave of being hooked on football is to sign him up for a session with a rather dotty counsellor called Natalie, portrayed to perfection by Christine Dukes.
Of course, that doesn’t go down too well with the plain-talking footie fan who hardly appreciates that kind of brain meddling and storms out of her consulting rooms only to charge into more trouble with the missus.
The play goes along at a cracking pace and, even for non-football aficionados, the gags, which come thick and fast, are very effective.
It’s safe to say that Peter Read has played a blinder with this one and there’s no way he’ll be left sick as a parrot with the audience reaction.
It’s a pity there weren’t more people there to watch but there’s still a chance to catch the play tonight (Thursday) at 7.30pm.
Posted by llanblogger at 9:45 AM