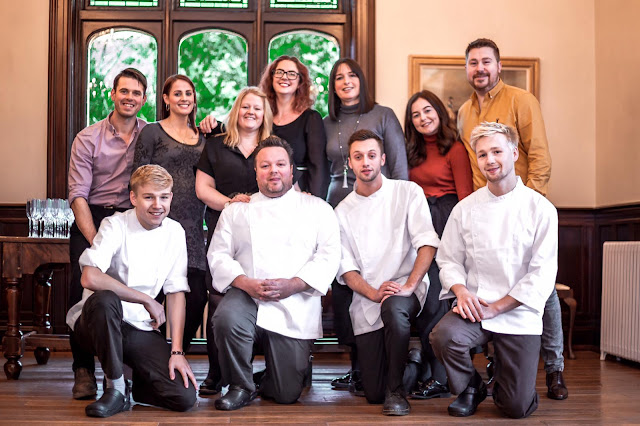 * The Three Eagles team line up ahead of the opening.

The Three Eagles is set to throw open its doors for business next week.
Its management team says reservations are already flooding in from people eager to sample its food and drinks.
Located on Bridge Street in historic Grade II-listed former coaching-inn the Wynnstay, The Three Eagles has been a work in progress over recent months with the building having been subject to extensive renovation works.
As the project nears completion, a strong management team have been assembled.
The majority of them originate from the local area, with almost all having attended Ysgol Dinas Bran.
Until now many of them had spent years plying their trade away from the town – some internationally.
Heading up the  team is general manager Amy Cross. A local farmer’s daughter, she has worked in the hospitality industry since her university days in Liverpool.
Having worked her way around the mountains, lakes and coastline of Wales, she brings over 15 years of experience to the table. Amy spent the last three years in Ireland, leading an award-winning restaurant through its launch in Dublin.
She has a track-record of launching a number of new fine dining restaurants, achieving recognition in the Michelin Guide having fronted a restaurant by 2-Michelin-Star chef Michael Caines MBE.

“It’s such an exciting time not just for the Three Eagles but for Llangollen and North Wales tourism as a whole. The Three Eagles will provide Llangollen with such an important boost for the local economy and it is a real privilege to be part of this journey from the very beginning”, said Amy.
“With the venue’s inception, some excellent career opportunities have been created. It’s the vision and commitment to a better Wales that the Three Eagles represents that has drawn these high flyers home, resulting in the creation of a first-class team. What we’re hoping will be key to our future success is the continued development of our staff.”
Amy joins experienced international chefs Adam Gaunt-Evans and Oliver Potter at the Three Eagles.
Assistant managers Nicole Farrell and Kim Watson also come with their own expertise.
Nicole has been a driving force behind the exclusive Llangollen wedding venue Tyn Dwr Hall whilst Kim has previously worked in a managerial position for a national gastro pub/restaurant chain.
Their fellow assistant manager Harry Hickson, from over the English border, compliments the team bringing years of managerial experience which meant travelling the globe as far as Australia building his wine knowledge.
Owners of The Three Eagles Matt and Vicky Jones say the concept of the venue has always been about showcasing the very best elements of Llangollen and the surrounding region.
Matt said: “When we set out in the beginning it was very important to us that we created opportunities here in Llangollen – first and foremost for Llangollen people. And that is exactly what The Three Eagles has done.
"The team have come home to take on this exciting project with us and I think that should give some indication as to just how impressive The Three Eagles is going to be.”
* To find out more about The Three Eagles, Llangollen go to www.thethreeeagles.co.uk
Posted by llanblogger at 6:54 AM