llanblogger is delighted to launch a new regular series of car reviews by STEVE ROGERS, one of the most respected motoring writers in the business and who is based in North Wales. We get into gear with his appraisal of the new Suzuki Jimny. 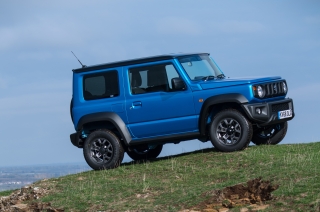 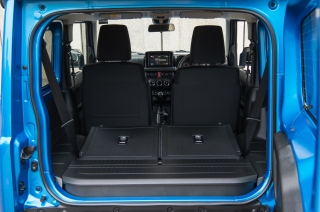 MEET the new Suzuki Jimny, a car almost as rare as a nine bob note.

Anyone wanting the funky off roader is in for a long wait because Suzuki has only got 600 and they have been snapped up even before the car goes on sale in January.


Even with a new 1.5 litre petrol engine Suzuki is struggling to get emissions down to the required level so the most we will get is 1,200 a year from 2020.


And that's a great shame because this Jimny is like nothing that has gone before.


It has been around for almost half a century and it is exactly 20 years since the last major facelift. That is too long to wait but those lucky enough to get their hands on the new Jimny will not be disappointed.


It is light years ahead of the old model and is, dare I say, reasonably comfortable. Anyone acquainted with Jimny will know it has a ride like a bucking bronko but has always been a car that doesn't mind taking knocks and is fantastic off road.


And that key strength is still there. The new car retains the good old ladder framed chassis but this time it is much more rigid which has gone some way to improving Jimny's road manners.


Has the 20 year wait for a serious upgrade been worth it? Absolutely. The new squared off shape - am I the only one who thinks it has a bit of Jeep Wrangler about it - retains the Jimny's funkyness (have I just created a new word) as well as providing a little more space in a car that is a little shorter.


Overall it is roomier gaining 53 litres more storage space with the back seats flat. With both in place there is only room for a couple of bags of shopping, but that's not what it is here for.


Jimny has a great following in rural Wales because of its ability to go anywhere, as well as its longevity.


I went off roading in Jimny at Stoneleigh Park, the National Agricultural Centre, and was staggered how easily it coped with the most demanding circuit I have experienced. It dropped down and climbed some horribly steep gullies, made mincemeat of 'quick sand' mud and easily traversed scary looking tracks thanks to its generous ground clearance.


This Jimny really has gone all sophisticated with its Allgrip Pro four wheel drive system. It has hill descent control and dual sensor brake support, but is still an authentic off roader  - it even has the old fashioned gear stick for low range transfer.


Inside has been spruced up but it is not too flash maintaining the hardwearing easy clean plastic facings. A few more creature comforts have been thrown in - air conditioning, Bluetooth connections, digital radio, cruise control on SZ4, and on the top end SZ5, navigation, Smartphone link and heated front seats.


The biggest change will be felt on the open road. Jimny still rolls on bends and roundabouts, and the ride certainly isn't smooth but it is a lot more settled so the kids are unlikely to be reaching for the sick bags on a trip to the supermarket.


The new 1.5 litre petrol engine is a bit noisy and would benefit from a sixth gear to lower the din at motorway speeds but has decent pick up in fourth and fifth gears. There is also a four speed automatic option. Prices: SZ4 £15,499; SZ5 £17,999 with an extra £1,000 for the automatic.


So Jimny has come of age at last, practical, eye catching, and a demon off road. It would sell here in its thousands if only Suzuki had thousands to sell.


*There is more good news. The excellent Vitara has been freshened up with soft touch dashboard trim (hooray!).


It gets a few other bits and bobs, blindside alert to help with overtaking, rear cross traffic alert, sunroof, centre armrest and storage box.


More significantly the 1-litre Boosterjet engine has been added to the range and it works a treat.


I had my doubts about such a small engine carrying a mid sized SUV but it does, and with ease.


Suzuki's petrol engines can hold their own against anyone and the 110bhp three-cylinder is up there with the best providing remarkable performance, economy and low emissions.


Anyone wanting more should go for the 1.4 litre Boosterjet which is another cracker.