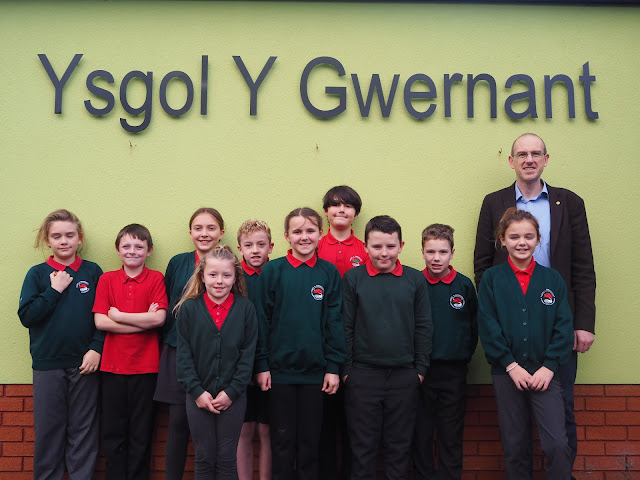 
Members of the School Council, Eco Council, Road Safety Group and Welsh Language Charter group invited Mr Gruffydd for a meeting to discuss their concerns.
Llyr Gruffydd, Plaid Cymru’s North Wales AM, gave a brief presentation of his work as an Assembly Member before listening to the pupils.
Llyr Gruffydd said: “The pupils of Ysgol y Gwernant were intelligent and eloquent, with a real concern about current affairs and issues. The waste and damage caused by Single-Use Plastics was a real worry for them.
“They were interested to hear that Plaid Cymru on Denbighshire Council are running a campaign to make the county a Single-Use Plastic-Free Council and there’s a strong local campaign in Llangollen as well.
“We agreed to write to the Welsh Government and Denbighshire County Council expressing their concerns. They also had concerns about the congestion and safety on Castle Street.
"This has been an ongoing concern for some time and it’s obvious that it impacts on the quality of life of people of all ages in the town. I know that the Town Council has an initiative to try to tackle this and the County Council has allocated some funds to this end, but it’s obvious that the children in the area feel that something should be done soon.


“It’s always a pleasure to talk to children about the issues that affect them. Far too often adults carry a lot of baggage with them and can make matters unnecessarily complicated. It was refreshing to hear the views of the younger generation. Even though they aren’t eligible to vote yet, I’m there to represent them as much as everybody else in the area.
“Ysgol y Gwernant is an excellent school and they obviously take their responsibilities seriously. There was a lovely environment there and it was a real pleasure to visit.” 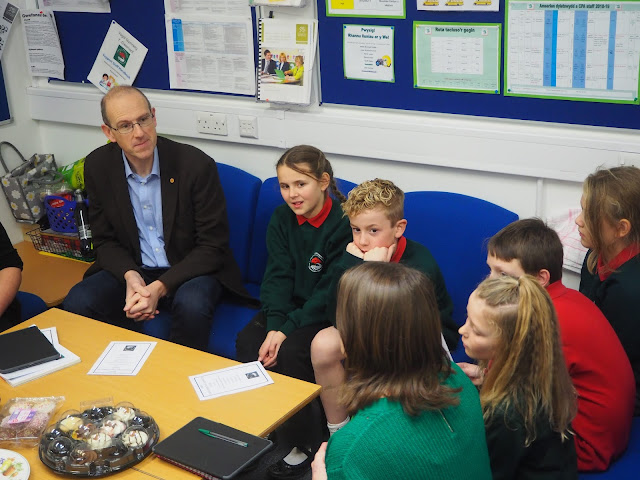 * The AM chats to the children about a range of topics.
Posted by llanblogger at 7:30 AM