Twenty Club dig up a hit with their comedy creepy

The advance publicity material describes the Twenty Club’s latest outing at the Town Hall as “Agatha Christie meets the Addams Family” and that perfectly sums it up.


A Tomb With A View by Norman Robbins is a traditional whodunnit woven around a scary, crazy family called the Tombs not one of whom is anywhere close to normal. 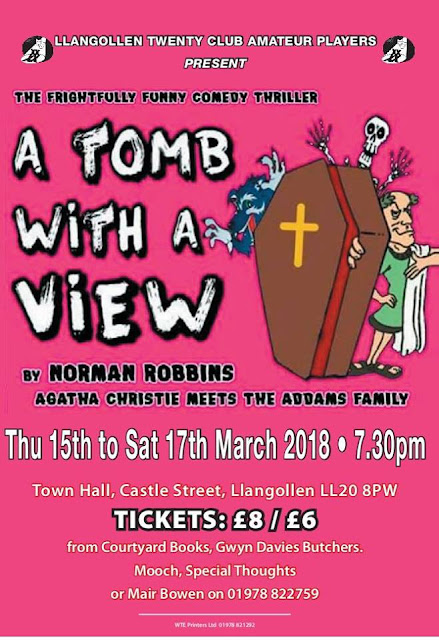 Their idea of good time is squabbling amongst themselves like a pack of snarly dogs or bumping off visitors to the family home and leaving them pushing up the marigolds outside in the garden.
They live in a big tumbledown mansion called Monument House where we join the five Tomb siblings and their retainers – along with two mystery guests – as they gather for the reading of the last will and testament of the head of the family, a grim-faced, creepy old geezer whose forbidding portrait hangs on the library wall.

It’s old man Tomb’s disembodied voice which narrates the introduction to the play, raising the question whether he’s actually dead or not.


And that’s what you continually have to ask yourself as one after another of the characters bites the dust.
To reveal any more of the plot would spoil things, so I’ll say only that there’s a nice little twist at the end.


Members of Twenty Club involved in the piece bring their usual versatility to bear in every one of the many roles.
Paula Sutton, devoid of any feminine touches, is the butch Emily Tomb whom one feels would like to sink her teeth into more than her favourite red apples, while her sister Dora Tomb, who loves to poison people with her home-brewed wine, is played with the perfect measure of eye-rolling madness by Rowena Owen.


Underneath a mop of mad-scientist hair is Mathew Oswald-Haggett who gives an accomplished performance as Lucien Tomb and another club stalwart David Connelly couldn’t be dottier as Marcus Tomb who thinks he’s Julius Ceasar and even wears a toga around the house.
Perfectly completing the lunatic row of Tombs is Sue Griffiths as man-mad sister Monica.


Stepping into the Twenty Club limelight for the first time is James Broderick. But on the strength of his neat portrayal of scheming family solicitor Hamilton Penworthy it won’t be his last.
Lyn Aston is as competent as ever in the role of Agatha Hammond, the sinister old housekeeper who has as many murderous tendencies as the rest of them, and Hannah Edwards makes a very believable Anne Franklin, old man Tomb’s live-in nurse.


Peregrine Potter, the nervous and shy visitor to Monument House who turns out to be central to the action, is played extremely proficiently by Twenty Club favourite Dan Pedley, and there’s a stylish performance from Esme Sallnow as his up-market associate Ermyntrude Ash whom you can also catch taking one of the lead roles in Llangollen Operatic Society’s forthcoming production of My Fair Lady.
This rewarding little comedy thriller provides a great night out and is a credit to director Jenni Lloyd and the whole behind-the-scenes team who help bring it to the stage.


There’s one final performance of the play tonight at 7.30pm.
Posted by llanblogger at 10:42 AM