SEE UPDATE AT FOOT OF STORY ... 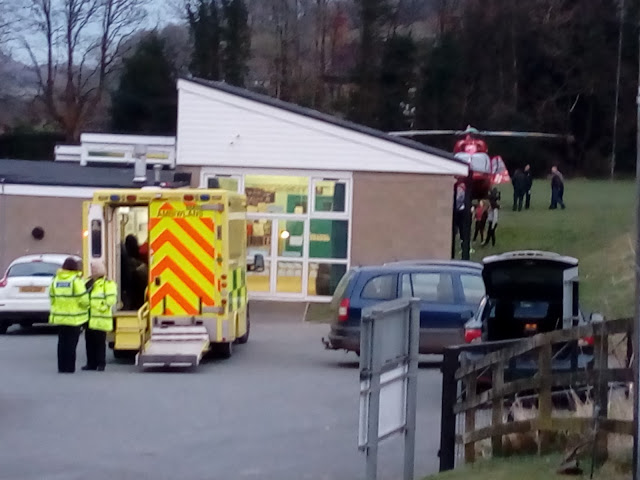 * The air ambulance, to the right, on the field beside the youth centre.

The Wales Air Ambulance landed in the field next to the youth centre in Willow Street earlier this evening.

It remained there for the best part of an hour before taking off again as darkness fell.

As yet llanblogger has been unable to discover the reason for it being in the area.

Outside the youth centre there was also a road ambulance and a police car.

There are unconfirmed reports of a road traffic collision having occurred on the A5 this evening and it is not known whether there may be any connection between this possibility and the appearance of the air ambulance.

North Wales Police said this morning (Thursday) that the air ambulance was called in after a six-year-old local boy was involved in a collision on Regent Street at around 5.20pm yesterday.

He was taken to Alder Hey Hospital to receive treatment for serious injuries.

Police have not issued any appeal for witnesses.

Posted by llanblogger at 7:42 PM