The day I survived David Cassidymania

llanblogger's Phil Robinson recalls a momentous day over 40 years ago

Back in the day David Cassidy, who has just died in Florida, had it all.
In the early 70s he was only a couple of years older than me but he had the looks, the talent and the charisma, all of which ensured he also had the hearts of legions of young girls.


And for a couple of days in the spring of 1973 most of them were outside my office window.
Not that it had anything to do with me, of course.

In that heady year I was working in the publicity department of the famous Belle Vue leisure centre in Manchester – the place where Cassidy was due to do four shows on March 13 and 14 as part of his smash-hit European tour.

Thanks to his starring role as son Keith in the enormously popular US show the Partridge Family he had rapidly taken on heartthrob status and become one of the hottest properties of the era.


The tour followed and every place he went he was mobbed by thousands of doting, screaming girls.
We’d witnessed a similar phenomenon with Beatlemania a decade earlier but this was much bigger. And louder.


In fact, by ’73 Cassidy’s fan club had more members than either its Beatles or Elvis counterparts.
It was against this crazy background that this handsome young actor/singer was due to take the stage of the Kings Hall arena at Belle Vue.


We knew in advance that the place was going to be thronged by his adoring teenage and sub-teenage female fans. But we weren’t quite prepared for the scale of the invasion.
Nor were we expecting how long it would continue because when I arrived for work on the morning of the first day hundreds of them were already outside the main gates and were tuning up their noisy renditions of his hits, like I Think I Love You, which continued at increasing volume for the next 10 hours or so. 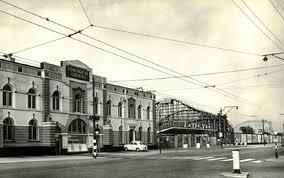 As the day wore on they continued to arrive on buses, in trains and out of cars driven by worried-looking dads.

I could see all this going on from the window of my office (pictured left) which overlooked the car park where they were gathering.


I viewed the unfolding scene with fascination but also growing concern as my treasured Hillman Imp was parked down there amongst the screaming, chanting hordes.

And as its decaying metalwork was held together by plastic filler I began to write off its chances of survival in the face of all the pushing and shoving going on.
Some wag in the office joked that I shouldn’t worry because David would probably fork out for a replacement Imp if this one was destroyed by his army of adherents. Not likely and therefore no consolation.


The cacophony did go on all day, right up to my leaving for home at around 5pm and beyond until showtime when the gates finally opened allowing the barmy girlie army to launch their big push on the Kings Hall. Cassidy, as far as I recall, had been smuggled in through another entrance to the complex so stayed completely untouched.
And no, despite my press office status, I didn’t get to attend the concert or meet the man himself, either that day or the next when the whole mad scene took place again.


My Hillman Imp and my hearing survived but sadly, ultimately, David Cassidy hasn’t now made it beyond the age of 67.
But it was a day I’ll never forget – only to be repeated to a lesser extent that same year when The Bay City Rollers gigged at Belle Vue. But that’s another story.
Posted by llanblogger at 10:41 AM