Early sighting of Santa on the river 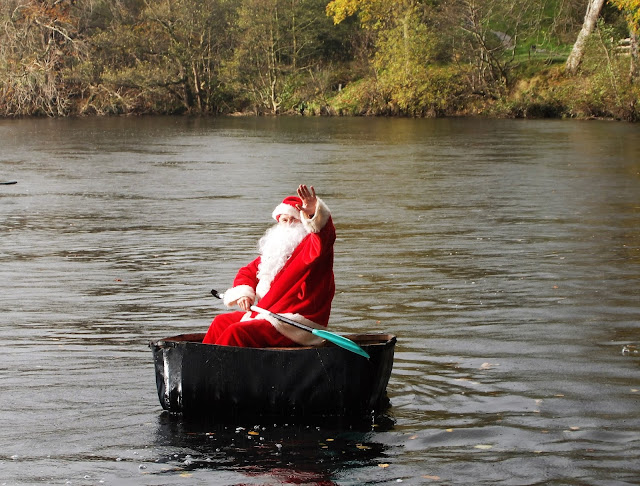 * Santa waves to onlookers from his coracle on the Dee.

Santa has been seen out on the River Dee on the lead up to Llangollen Christmas Festival on Saturday November 25.

He was spotted at the Horseshoe Falls in a coracle.

“I thought that I’d use the river to get into Llangollen this year, the coracle was most enjoyable and
relaxing but a little slow.” Santa said.

He has also tried an inflatable with some of his elves (pictured below) but decided that experience was far too scary.

“I think I’ll stick with the sleigh and my reindeer,” Santa added, “it’s fast, manoeuvrable and
best of all magic.” 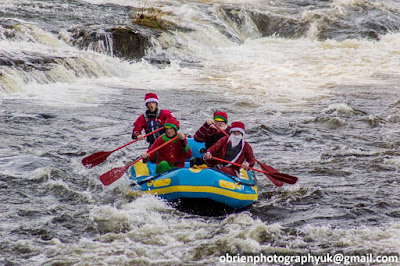 The Christmas Festival, which is expected to attract at least 2,000 people, will feature a parade,
street stalls, raffles, a grotto, an appearance by Llangollen Silver Band, and local choirs and
singers and the ceremonial switch-on of the Christmas lights.

The big parade starts from Mill Street car park at 1pm and later Siôn Corn will be on hand to meet
young visitors in his grotto inside the Town Hall.

Entertainment will this year be centred on the steps of the library and tourist information centre as
well as the Town Hall and Market Street.

Proceeds from the event will once again be donated to Wales Air Ambulance.
Posted by llanblogger at 6:54 AM