Twenty Club's Vicar of Dibley raises a litany of laughs 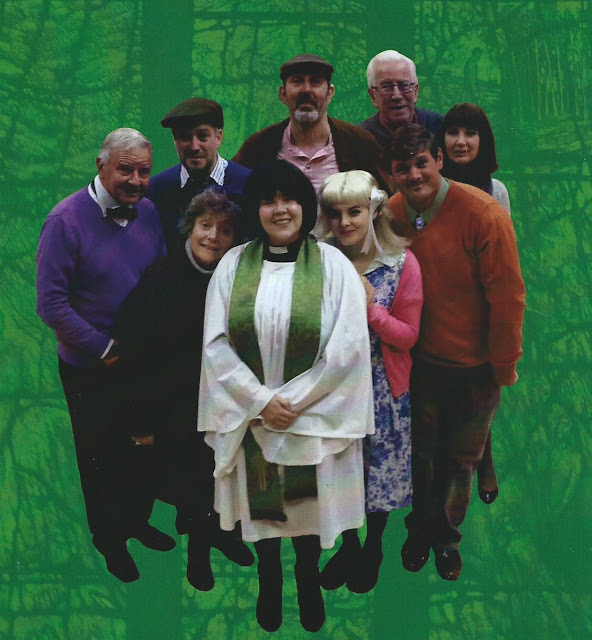 * The cast of The Vicar of Dibley.


Some truly inspired casting allowed Llangollen’s Twenty Club to present a divine piece of comedy with The Vicar of Dibley at the Town Hall last night.
This meant that each of the key characters in this ecclesiastical romp so familiar to fans of the smash-hit TV series was portrayed by actors of such competence – both experienced and new – that their parts fitted them like well-worn cassocks.


And this made for some truly hilarious results.
Revving up the laughs in the title role of Geraldine Granger, the lady vicar who arrives unexpectedly to take over the parish following the death of a long-serving incumbent, was the marvellous Louise Cielecki, a veteran of many local am dram performances and fresh out of drama school.


While paying due homage to Dawn French who made the part famous on the box, she also managed to come up with her own nuanced interpretation of the role which at times brought the audience to the verge of tears of laughter.
Another rip-snorting cameo was provided by Chris Sims as Jim Trott. No, no, no, no, er, yes, yes, it was. He had the dithering parish council member off to a tee, gruff voice, stooped posture and all.


There can’t be many young amateur actresses out there who could have handled so competently the role of dotty parish verger Alice Tinker as 17-year-old Carys Stallard. Again, this uncannily accurate portrayal of TV original Emma Chambers can only have come as the result of many hours of keen observation.
Those old Vicar of Dibley recordings must truly be worn out by now as it was the same happy story with Eric Jones who brilliantly doubled for John Bluthal playing the bumbling, bow-tied parish clerk Frank Pickle.


In his first play with the Twenty Club Graham Smith also shone brightly as foul-mouthed farmer Owen Newitt. He looked, spoke and moved so much like the late great Roger Lloyd-Pack who took the role on the telly that he could hardly fail to wring out the same abundance of laughs from this script.
Another relative newcomer who went down a storm as Hugo  Horton, the scatter-brained son of the lord of the manor, was Dan Pedley who we’re clearly going to be seeing much more of in the future.


Helping bind everything together with consummate skill were old hands Barry Cook as David Horton and Chris Dukes as Letitia Cropley whose well-intentioned but eccentrically flavoured culinary creations must have poisoned more people than a shedload of Borgia women.
At the end of the evening our sides were aching from the ministrations of the Vicar of Dibley and her crazy flock who held services on Thursday, Friday and two on Saturday.


And apart from the enormously talented team who created this litany of laughter we must also say a big thank you to Lyn Aston who directed the piece and John Clifford who served as her assistant.
Posted by llanblogger at 10:30 AM