Berwyn Station takes a trip into the past 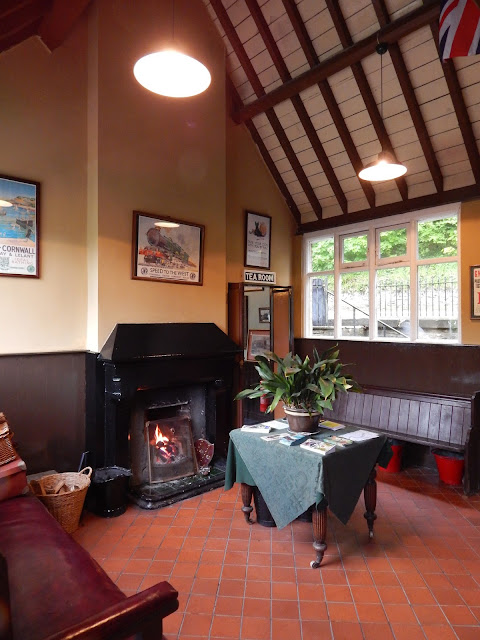 * The waiting room restored to its Edwardian glory.

A small but dedicated bunch of railway volunteers have been hard at work restoring the iconic Berwyn station back to its Edwardian glory.

Built for the convenience of local landowners in 1865, the station soon became a popular stop for holidaymakers and tourists to the Dee Valley, due to its close proximity to the Horseshoe Falls, Chain Bridge and associated Hotel.

However, in the 1950s the station building closed to the public and after the Ruabon to Barmouth railway line closed in the 1960s, the station gradually fell into disrepair.  Trains returned to Berwyn in 1985 thanks to the efforts of the Llangollen Railway and work has progressed in restoring the station back to its former glory.

Recently efforts have been focussing on the former ticket office, with a replica wooden counter having been commissioned and installed last winter.

Period fixtures and fittings have been painstakingly sourced from all over the UK, so that the room now resembles how it would have looked in the early 1900s. In the restored waiting room, traditional oil lamps are in the process of being installed, to compliment the surviving large original fireplace.

The station will be open this weekend, with volunteers on-hand to recreate the workings of a traditional country station in the steam age. Enjoy cream teas in the station tea room, explore the riverside walks or take a nostalgic trip along the preserved Llangollen Railway. Steam hauled trains depart from Berwyn towards Corwen at 10.48, 13.08 and 15.18, and towards Llangollen at 12.10, 14.30 and 16.40.

In the underpass to the Chain Bridge at the eastern end of Berwyn station, there are poignant reminders of local sacrifice during the First World War. The white-glazed bricks that line the underpass seem to have taken pencil marks readily, with some of the still legible messages dating from 1914 - 1918.

One message is signed by R.Roberts in July 1913. Next to it and dated 25 December 1914, is written Lance Corporal R.Roberts - suggesting he had enlisted, been promoted and returned for Christmas leave.

One message says "Berlin last stop", another is signed "Balls from Belgium". One is signed A. J. Candy – an Alfred James Candy is honoured on Llangollen’s War Memorial (unveiled by Capt. Best of Vivod on July 8th 1923) as having fallen in action. Four out of eleven soldiers' names that have been researched appear on the war memorial.

As a mark of respect, a commemorative poppy wreath will also be on display at Berwyn, along with an authentic GWR personnel stretcher.
Posted by llanblogger at 5:33 PM