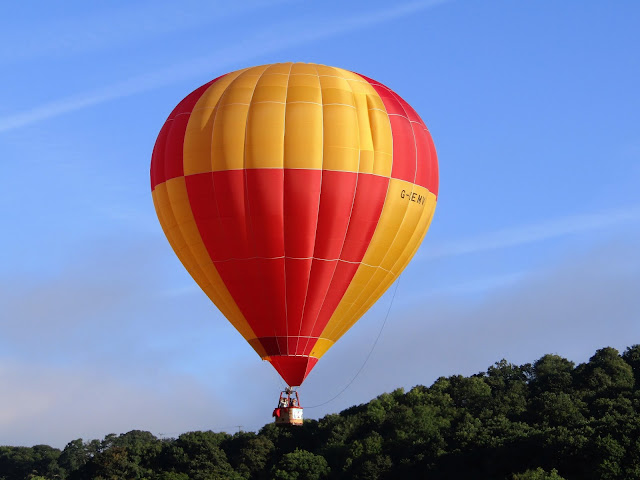 * A balloon over Llangollen in September.
County councillor Stuart Davies says he has heard back from the organisers of the Welsh International Balloon Festival which is moving out of Llangollen and into neighbouring Shropshire.
Earlier this week the British Ironwork Centre near Oswestry dropped the bombshell news that it would be hosting the popular event, run by Nightingale House Hospice in aid of its funds, next August bank holiday.


Cllr Davies described the move as a “big loss” to Llangollen as the festival had attracted 7,000 people – both to the Pavilion field where it was held and the town centre – in September.
And he promised to find out the reason for the decision.


On social media yesterday he said: “The lady from Nightingale House has called me to explain. They have been made an offer.
“The Ironwork Centre is going to run the event for them. A win win situation for a very worthy cause.


“I explained that I wished they had talked to me first to see if we could have helped so that the event could have taken place in Llangollen.
“She apologised for the news going out prematurely but it had been beyond their control.


“She said that the event is not going to be called the Welsh International Balloon Festival, that it would not be fair to take the name away from Llangollen.
“I reiterated that if they were thinking of doing another event in the future then please to talk to us first. Part of the conversation was about other things we could do.


“I wish a very worthy cause well and urge us all to continue to support them.”
He told llanblogger: “I have to look at the bigger picture which means looking at the impact of losing an event which can bring 7,000 people into our town with all the benefits that that brings to local businesses - although there is the downside of the parking situation.


“I am having top level talks with our people to ensure that in the future we are more proactive, corporately, in engaging with big players that can bring business to our town.”
Posted by llanblogger at 2:23 PM