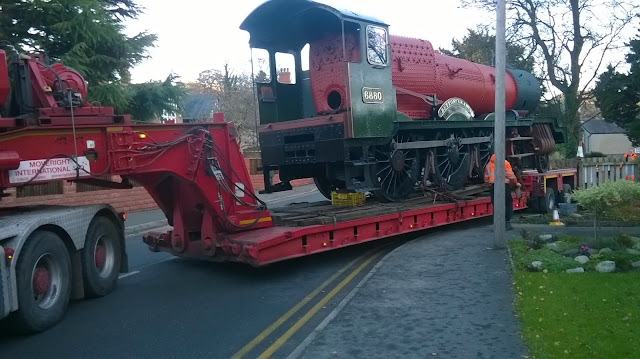 * 6880 Betton Grange aboard a low loader is inched into the entrance to the railway works in Abbey Road.

Traffic on Abbey Road was temporarily halted yesterday (Monday) afternoon to allow a prestigious steam engine to be shoehorned into Llangollen railway workshops.

Last weekend 6880 Betton Grange had been one of the stars at the world’s biggest model railway exhibition, the Warley MRC event at Birmingham’s NEC, and was being returned to its home base.

This was the first time the loco had appeared in public.

The Betton Grange Society's working parties had lovingly prepared 6880 for display at Warley, assembling all of the motion parts to finish the bottom end of the engine.

The boiler from ex-GWR loco No. 5952, Cogan Hall, was mounted on the frames for the display period.

This will allow the society to set out the pipe runs needed when No. 7927 Willington Hall’s boiler is finally refurbished for use on the completed engine.

The transfer of the boiler from Cogan Hall on to Betton Grange was handled by volunteers led by chief engineer Chris Moore.

The society has announced that TV presenter Mark Evans has agreed to be their first ambassador.

Mark has delivered a number of programmes on Channel 4 and Discovery including An MG is Born, A Race Car is Born and A Plane is Born.

He joined the society at Llangollen in October and received a warm welcome from the 6880 directors who explained all aspects of the project to him.

Ideas flowed as to how Mark could help members achieve their ambition of finishing 6880 within the next two years.

* Llangollen Railway's Winter Warmer gala weekend will be held on December 30 and 31.

It will feature an intensive timetable, authentic cameos and a real ale bar.

Services will be in operation between Llangollen and Carrog (the temporary platform at Corwen East being closed over the winter period as part of the new Corwen Central station works) and will feature a combination of steam, diesel and DMU traction.


Discounted advance fares are available through the railway's website: http://www.llangollen-railway.co.uk/event/, with an adult day rover being just £16 (£18 on the day) and just £9 for children. Senior and family discounts are also available.

Posted by llanblogger at 9:28 AM