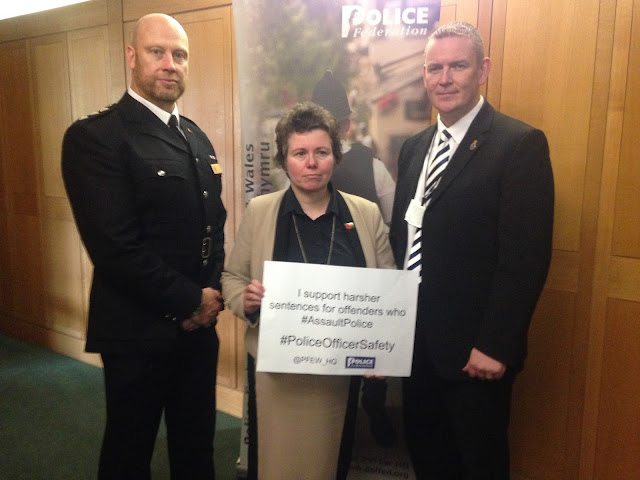 * Susan Elan Jones MP with representatives of the Police Federation in Parliament.

The campaign was launched in response to the news that 22,394 officers in England and Wales were assaulted in the last year.

The Clwyd South Labour MP said: "We are now seeing a police officer assaulted every 22 minutes, with a fifth of all police having been assaulted. That is a national disgrace.

"Some of the sentences awarded are unbelievably lenient. They include someone who threw acid at an officer's face getting only 20 months in jail even though they were out on licence, someone who stabbed an officer getting a community sentence and 15 people jumping on a single police woman on Boxing Day leaving internal spinal injuries that class her as disabled receiving no custodial sentence.

"Police men and women work tirelessly to serve our communities and keep our streets safe. They should not have to endure assaults as part of their job. I am fully behind the Police Federation's campaign to support police safety and bring in harsher sentences where they are needed."
Posted by llanblogger at 6:41 AM