Operatic to chat on air about new show 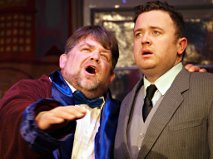 * John Clifford and Ross Wilson in a scene from the show.

Cast and crew of Llangollen Operatic Society's forthcoming show, The Producers, will go on air to talk about the production this morning (Friday).

They will chat live to host Gwynne Evans on his BBC Radio Wales show at around 11.30am.

Gwynne will also be playing a recording of one of the main chorus numbers, Along Came Bialy, which the cast recorded during a recent rehearsal.

The Producers will be staged at Llangollen Town Hall from April 12-16, starting at 7.30pm, and with a matinee performance at 2.30pm on Saturday 16th.

Tickets can still be purchased online at www.ticketsource.co.uk/llangollenoperaticsociety. 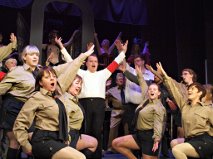 * A roistering scene from The Producers.
Posted by llanblogger at 6:50 AM