Bank investigates after cashpoint fails to pay out

A BANK has agreed to investigate after a Llangollen man received no money when he used a cashpoint in the town.


Well-known town crier Austin “Chem” Cheminais had something to shout about when tried to withdraw £200 from the ATM outside the Co-op supermarket in Regent Street on Saturday April 9 for a weekend trip away nd the machine failed dispense any money. 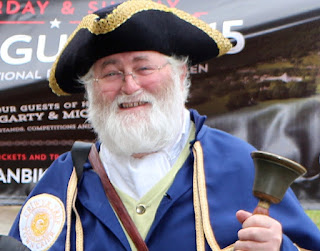 His bank, HSBC, has since reimbursed him with the full amount but says it is now investigating with the cashpoint’s operating company why he had a problem.


Mr Cheminais (pictured) said: “After the machine returned my card but failed to let me have my cash I immediately phoned the help number displayed on the cash machine and after a wait spoke to a someone who then put me on hold before passing me on to some else.


“They checked and confirmed that there had been a problem and agreed that the machine hadn't given me any cash.


“They then told me that my account had been debited but there was nothing that they could do and that I would have to go through my own bank to dispute the transaction.


“Two people came to use the machine whilst I was still there and when I told them what had happened they said, `It is always doing it! It's been doing it for weeks’.


“Frustratingly, when I contacted my bank they suggested that it would have been better and a lot easier had I used a HSBC cash point.


“I pointed out that they had closed all of their local branches and that using their cashpoint would require a 23-mile round-trip.


“I worry that it could happen to someone in different circumstances who needed the money to feed their children or at an urgent bill.”


HSBC has no credited Mr Cheminais’s account with the £200.


And a bank spokesperson said: “We are now investigating why there were issues with the ATM with its operator.”


A spokesperson for Cashzone, which operates the cashpoint, said: “We are very sorry for the inconvenience experienced by Mr Cheminais.
“Whenever we receive reports of service issues we send out our expert team of engineers as quickly as possible because we know how important it is for the community to have reliable access to cash.


“People who experience issues when withdrawing money should check their bank accounts and get in touch with their bank who will be able to assist them.”
Posted by llanblogger at 6:45 AM