LLANGOLLEN’S new community speed watch team has had its first outing and reported a number of motorists for exceeding the limit.


The group of volunteer residents was formed earlier this year to monitor speeding hotspots in the town.

After receiving statutory training in police hand-held radar guns, they had their first monitoring session earlier this week.
Local county councillor Stuart Davies, who is one of the group, said: “Myself and another volunteer were positioned on the A539 on the Wrexham side of the bus stop.

"We were there for half an hour and monitored a number of motorists – I’m not allowed to say exactly how many - exceeding the 30mph limit as they headed along the road in the direction of Wrexham.


“Their details have been given to the police and they will now receive warning letters.

"Persistent offenders will receive up to two warning letters, and on a third occasion, they can expect further action by police." 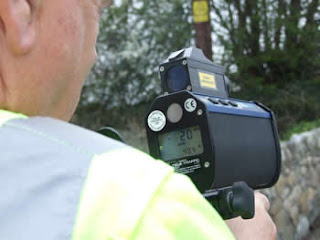 He added: “It was a very worthwhile exercise as we get a lot of complaints about speeding in the Llangollen area and this scheme helps us to react positively without being too draconian.
“All the points where our monitoring takes place are first risk-assessed by the police.


“Within the next few weeks we will be looking at the 20mph zones in Brook Street and Pengwern, near Pentrefelin and on the A5 close to the fire station.
“We currently have four members in the group with a fifth who has just applied to join.”

Posted by llanblogger at 8:31 AM