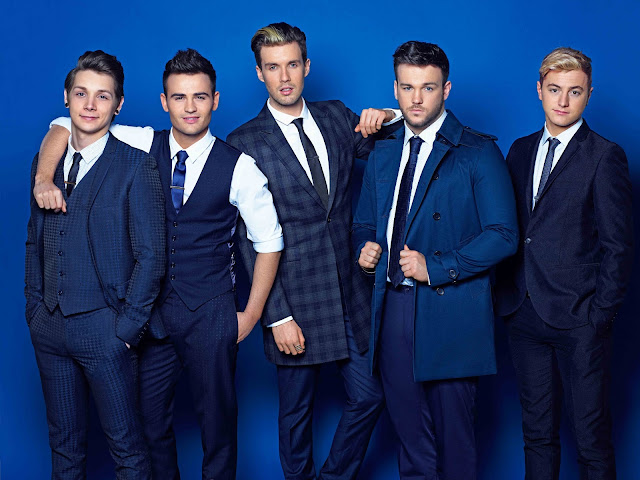 A musical theatre boy band who won TV’s Britain’s Got Talent and reduced star judge Amanda Holden to tears are headed to North Wales.
Collabro will be starring with Kerry Ellis, the First Lady of the West End, in the Voices of Musical Theatre concert at Llangollen International Musical Eisteddfod on Wednesday, July 6.
And for one of the band members, Thomas Redgrave, it's going to mean a happy return to Llangollen where he competed as part of a choir from London some years ago.
Collabro are the latest top name to be announced for the landmark 70th festival since it was established in 1947 to promote peace and harmony in the aftermath of the Second World War.
Katherine Jenkins will be bringing the curtain up on opening night, Tuesday, July 5, when the popular mezzo soprano will be treating the audience to a concert version of Georges Bizet’s opera, Carmen, opposite American tenor Noah Stewart.

Opera superstar Bryn Terfel will be sharing the stage on Thursday, July 7, with a good friend who's also a world class tenor, the supremely talented Maltese opera colleague, Joseph Calleja, in a concert that's also being supported by Pendine Park
Meanwhile, Jools Holland and his Rhythm & Blues Orchestra are returning to Llangollen to bring the curtain down on the festival with a foot stomping party on Sunday, July 10.
Collabro won the hit talent show two years ago, earning rave reviews from the likes of Simon Cowell and Holden along the way and are no strangers to tearful audience members.
In fact the five-strong group say they know they have done a good job when they see their fans in tears – and it happens a great deal.
According to Thomas Redgrave, he often sees people in the audience dabbing their eyes as they perform hits from shows like Les Misérables, Phantom of the Opera, Chess and West Side Story.
Redgrave, who hails from Saltfleet, Lincolnshire, said: “Musical theatre is such a special genre which people seem to connect with.
“It’s a dream come true for Collabro to be performing at Llangollen alongside Kerry Ellis who is the first lady of musical theatre, particularly when it comes to West End productions.
“Working with Kerry Ellis will be something else we can tick off our bucket list. We seem to be very quickly achieving all our ambitions, it’s incredible.”
Redgrave is looking forward to going back to Llangollen and has already told fellow members, Michael Auger, Richard Hadfield, Jamie Lambert and Matt Pagan, all about the festival
He said: “I couldn’t believe how incredible the festival was as a competitor even though I was just one member of a large choir.
“I remember we finished in third place and our conductor was at the bar when he should have been on stage receiving our award!
“The passion for music at Llangollen was so obvious and incredible. I can’t wait to return and have told the boys all about it.
“The fact we will be performing at the 70th Eisteddfod is amazing and we are so honoured."
The group, currently touring the UK and playing to sold-out audiences, have been enjoying life since winning Britain’s Got Talent and releasing their first album, Stars, which went straight to the top of the UK charts.
Redgrave said: “We are living our dream, everything has gone amazingly well. We’ve toured America and Japan and even managed to sing ‘I Dreamed a Dream’, from Les Misérables, to a Japanese audience in their own language - that took some doing.
“Our tour has gone amazingly well and we are all so looking forward to appearing at Llangollen. It’s going to be an amazing and an unforgettable evening.”
Collabro, who performed for the Duke and Duchess of Cambridge at the 2014 Royal Variety Performance and at the 2015 VE Day 70 Party to Remember on Horse Guards Parade, won the 2014 Britain’s Got Talent by a big margin after wowing the huge TV audience with a rendition of Stars from Les Misérables.
Eisteddfod Musical Director Eilir Owen Griffiths said: “Collabro are a group with a distinct style and will grace the Llangollen stage.
“The Voices of Musical Theatre Wednesday evening concert promises to be a real highlight this year.
Joining Kerry Ellis and Collabro will be the Glasgow Academy of Musical Theatre, the CBC Voices from the University of Wales Trinity Saint David and the Welsh National Opera Orchestra under the direction of John Quirk.
He added: “It’s going to be an unforgettable evening including songs from all the world’s major musical theatre productions. It’s not to be missed.”
Wednesday will be International Children’s Day and will include choral and dance competitions and also a new Under 16s solo competition, along with the crowning of the Children’s Choir of the World.
Friday will celebrate Rhythms of the World and will be a feast of music and dance from the best of the Eisteddfod’s international competitors with the Dance Champions of the World competition climax at the evening concert.
It will open with a Caribbean Carnival Extravaganza, followed by the International Peace message delivered by Theatr yr Ifanc, Rhosllannerchrugog.
In a change of the scheduling Friday will also see the Parade of Nations, led by Eisteddfod President Terry Waite, switched from Tuesday in anticipation of bigger crowds and more competitors being present.
Saturday is dedicated to the top choirs and concludes with the Choir of the World competition for the Pavarotti Trophy while Sunday sees the Eisteddfod let its hair down for Llanfest before the climactic final concert.
To book tickets and for more details on the 2016 festival go to the website at www.international-eisteddfod.co.uk

Posted by llanblogger at 7:08 AM